Charro Claus and the Tejas Kid 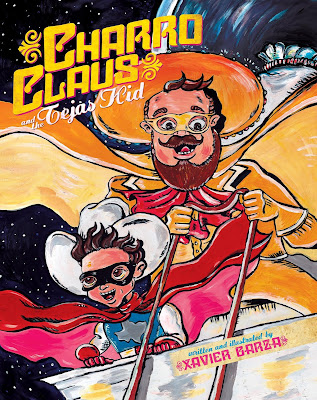 ¡Orale! Did you know that Santa Claus has a Mexican cousin? ¡De veras! Pancho, young Vincent’s tío, is Santa’s primo! He can speak Spanish and English and sings like a mariachi. Pues, Santa is getting older, the border along the Río Grande is too long—and he needs help. So when Pancho agrees to help his primo deliver gifts to all the children living in towns on the US-Mexican border, his raggedy, ill-fitting mariachi outfit is transformed into “a gold jacket with matching sequined trousers, rattlesnake-skin boots with silver spurs, a big sombrero covered in gold sequins and blinking Christmas lights, a great big cape and a golden mask.” He becomes—¿estan listos?—the great Charro Claus, and his nieto,Vincent, who jumps out of his tío’s magic sack of presents, becomes Charro Claus’s assistant, the mask- and cape-wearing Tejas Kid!

With their broken-down wagon turned brand new, a sack filled with magic dust, and their incredible Flying Burritos—decked out in lucha libre masks and tiny capes—suddenly rising up in the air, Charro Claus and the Tejas Kid are off! And, on this particular Christmas Eve, on this magic night, nothing can keep the two from delivering toys to all the children who live along the border.

Not even rain or cloudy skies or walls or wire fences keep them from crossing back and forth to El Paso and to Ciudad Juárez, to Roma and to Miguel Alemán, to Río Grande City and to Camargo. On that big starry night, there’s no town or city, no matter how big or small, that the newly named Charro Claus forgets. How could he? The border is his home!

The English and Spanish texts are attractively laid out close together, either on the same page or opposing pages, offering opportunities for hablantes and Spanish learners to read or follow along in either or both languages. And Spanish words are occasionally sprinkled into the English text, the way that bilingual people speak.

In an interesting afterword, Garza relates family stories about and childhood experiences with individuals who adopted the persona of Santa Claus’s Mexican cousin, “Pancho Claus,” bringing gifts to the neighborhood kids. Garza later wrote this version for his young son, Vincent, changing “Pancho” to “Charro” and modeling tío and nieto after themselves.

I’d like to see every child living in the towns on both sides of the outrageous, forbidding, miles-long barb-wired fence—and especially, every refugee child held in the border-town detention centers—own a copy of this book. They could all use a little magic, right about now. Charro Claus and the Tejas Kid is highly recommended.