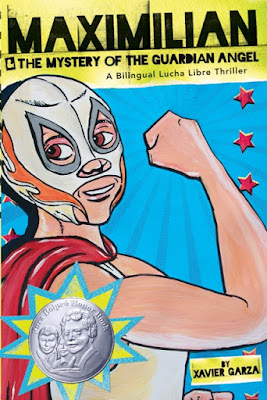 Lucha Libre is a battle between good and evil, between técnicos and rudos. The symbolism of Lucha Libre plays out in the realities of the streets of Mexico and the impoverished Mexican-inhabited border towns of southern Texas: the struggle between extreme poverty and extreme wealth, between honesty and dishonesty, between justice and injustice. Everywhere in the Lucha Libre world, the battle is the same, everyone understands the symbolism, and the masked, caped and costumed luchadores—the “social wrestlers”—are the superheroes of the community.

In both novels, artist, teacher and storyteller Xavier Garza, who lives in San Antonio, captures drama and everyday life along the border, in a way that will appeal to middle readers.

In Mystery of the Guardian Angel, soon-to-be sixth grader Maximilian, like many Mexican-American youngsters, is a Lucha Libre fan. He knows the names and stories of all the luchadores, collects the colorful masks of his favorites, and attends every such event he can. If Max had to name the one luchador in the world that he idolizes, this would be the iconic Ángel de la Guarda (Guardian Angel), the greatest of all Lucha Libre legends, the fearless luchador who has been taking on all rudos—in the ring and in movies—for some four decades.

But Max’s world suddenly changes when he slips over the guardrail and discovers the identity of the Guardian Angel, someone closer to him than he ever would have imagined. And Max wants to be him.

Garza’s extended network of luchadores—among them the hated rudos Vampire Velasquez, la Dama Enmascarada, and the chain-collar wearing Dog-Man Aguayo; and the técnicos Aztec Princess, el Toro Grande, and, of course, el Ángel de la Guarda—in many ways mirror Maximilian’s extended family of parents, siblings, aunts, uncles and cousins. All are complex, fiery, and have each other’s back; and readers will find out that their personal boundaries often cross the guardrails as well.

There is enough fast-moving action here to hold the attention of the most testosterone-filled middle-grade boys. Here, despite the rules that mixed tag team matches prohibit men and women from wrestling with each other, the rudos are not above cheating:

As well, there are life lessons. Years ago, when young Rodolfo, then new to the world of Lucha Libre, had complained about the intense training, retired luchador Joaquin Anaya told him:

You see that man over there?….His wrestling moniker is el Demonio. His real name is Alejandro. He left his job as a railroad worker to pursue his dream of becoming a masked luchador. He has a wife and six kids. One day your life could be in his hands. And vice versa. Every time you and your opponents go out into that ring, you’re completely dependent on each other. You have to work together. One wrong move, one missed fall or slight miscalculation can send both of you to the hospital or worse.

What young Maximilian discovers and how his discovery plays out is a coming-of-age tale in itself. 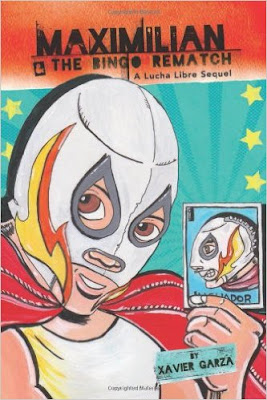 In Bingo Rematch, conflict reigns as Maximilian is beginning junior high, a challenge everyone who’s ever been to junior high will remember. In school, will the mean eighth-graders prevail? In the ring, there’s an all-out war between the técnicos and rudos, of course. Who will sacrifice himself to save a semi-conscious tag-team partner? There’s an almost all-out, “no holds barred brawl” between Tía Dolores and Tía Socorro, who both claim the Queen Bingo trophy. Will Father Martinez rig the lotería game in order to achieve peace? Will a moral lesson end a life-long feud? Maximilian’s love, Celia, “the girl of his dreams,” abruptly moves to California, and a new girl with a mysterious connection enters the scene. Will Max’s and Celia’s long-distance love last or will the newcomer's machinations have dire consequences? When Max comes to the realization that he belongs to Lucha Libre “royalty,” will he learn how being involved in Lucha Libre can devastate family relationships?

As in Guardian Angel, Bingo Rematch is an intense, quick-paced page-turner that will grab both English readers and hablantes, especially boys. As both Lucha Libre stories careen from action to hilarious telenovela and back again (in Guardian Angel, for instance, spurned girlfriend becomes ruda in order to tackle and humiliate ex-boyfriend who finds out too late that…), middle readers will also encounter often-explosive, yet enduring, family relationships and outside-the-ring, bonding camaraderie among Lucha Libre’s “sworn enemies.”

Garza’s full-color covers, in acrylic on paper, shows us a determined, young, die-hard Lucha Libre aficionado; and he begins each chapter with bold, black-and-white art—rendered in pen-and-ink and brush—that recaptures the feel of the old El Santo comic books.

One of the things that make these books outstanding is their careful Spanish translation, done at least as well as the English version; I’m especially impressed at the way the idiomatic English is interpreted into idiomatic Spanish. (In Bingo Rematch, for instance, Max’s mom lets his sister Rita know that she knows who broke the piggy bank. In English, Mom tells Rita: “Don’t lie. I caught you red-handed.” And in Spanish, it becomes, “No me eches mentiras, Rita…Te agarré con las manos en la masa.” In addition, the brilliant book design features parallel translations that facilitate bilingualism, so both English speakers who are learning Spanish and hablantes who are learning English can enjoy the story without having to break the action to locate the translation.