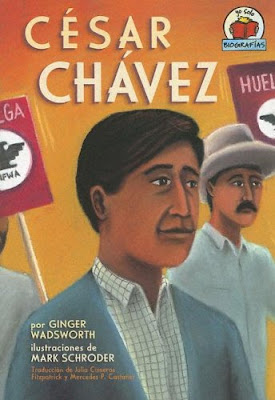 Part of the “On My Own Biography” series, César Chávez is a poorly conceptualized and abysmally written attempt to describe the life and organizing work of a humble, courageous man.

“Sometimes the fields smelled of pesticides. The farmers sprayed pesticides to kill insects that might eat the plants. Some of these pesticides made the workers sick.” (Italics mine.)

In fact, agricultural pesticides contain known carcinogens; farm worker children living in agricultural areas are among the most vulnerable to birth defects, neurological complications, respiratory illness, and cancers; and farm workers have been struggling for nearly 20 years against the use of dangerous pesticides in the fields. Wadsworth’s use of the words “sometimes” and “some” minimizes a tremendous problem. There’s more:

When they needed food, César’s parents shopped in the nearest town. Signs over some stores said White Trade Only. César’s family was Mexican. They could not shop at those stores. César missed Arizona. He wanted to ride a horse. He wanted to climb a tree.

No joke. It really says that. In her description of racism as just another inconvenient fact of life, the author simplifies and downplays the enormity of a problem that confronts many, many children in all areas of the country.

In her description of the beginnings of Chévez’ organizing the farm worker struggle, Wadsworth writes:

Many people thought that César would fail. Rich families or big companies owned most farms. César was poor. He had dark skin. And he was only a farmworker, one of thousands.

This section could have easily been written to show what was to occur in a way that would have had young children empathizing with this courageous organizer. Try this:

Many people thought that César would fail. Rich families or big companies owned most farms. They thought that because César was poor, he had dark skin, and he was only one of thousands of farmworkers, he didn’t stand a chance. They were wrong.

Children, even very young children, have the propensity to understand complex issues, such as poverty, horrible working conditions, and racism. Indeed, many young children have to deal with these issues in their lives. It’s all in the way the issues are presented, and gifted teachers and writers know this. We can either let children know that they’re capable of changing the world, or we can teach them to be helpless, to accept the status quo. César Chávez is not recommended.