Yeny and the Children for Peace 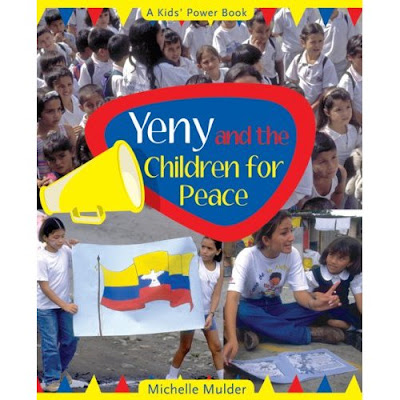 Yeny is the new kid in her elementary school in Bogotá, Colombia. Her family has recently fled the violence of the grupos armados in their rural village and is now living with her aunt and cousins. Her uncle has been kidnapped, and from time to time her aunt and cousins go to the radio station to broadcast messages to him. At school, Yeny ends up the seatmate of the class bully and has trouble making friends until she hears about a meeting of children who want to organize a peace carnival. Yeny’s father discourages her from attending, but he is torn between wanting to keep his children safe and wanting them to have friends in their new home. Will Yeny persuade her father to let her take part in the children’s campaign for peace? Will this effort by Colombia’s youth make a difference in a nation torn by civil strife, gangs, and narcotraficantes?

Mulder has written a fictional tale based on the real-life efforts of the Colombian Children’s Movement for Peace. Readers will come to understand why this remarkable youth-run movement is a perennial candidate for the Nobel Peace Prize. Black-and-white photos of the children taking part in the organization’s activities lend increased realism to the story; there is also a glossary of Spanish words as they are used in Colombia. The subplot involving the bully promises more drama than it delivers, but the story overall is engaging and hopeful. The author’s enthusiasm and affection for the country and its people shows through. Recommended.