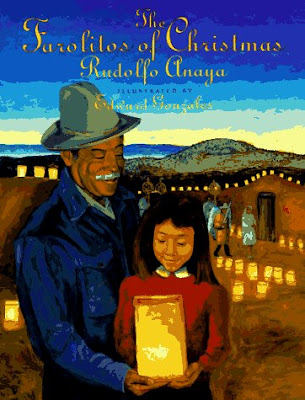 Artfully combining Christian and Indigenous traditions, Rudolfo Anaya has created a charming Christmas tale. The story, which was originally published in New Mexico Magazine, is set in the village of San Juan, a fictional pueblo in New Mexico, at the foot of the Sangre de Cristo Mountains.

The northern pueblos were among the last taken over during the Spanish conquest, and there was much resistance from the Indigenous peoples who lived there. My own Kowea (Cahuilla) family has a story from that time: One of our ancestors in Southern California learned that the Spaniards were moving out from San Diego to try to take over the land and treasures of the people all the way to New Mexico. He went as a runner to the Mojave, who sent a runner to the next village, and so on until all the people from the valley of New Mexico converged on the fourth pueblo and beat the daylights out of the Spaniards, effectively giving themselves 40 years until the Spaniards returned with more soldiers and weapons. The people never really gave up, because although the Spaniards brought Catholicism and we had to live under it or die, we didn’t have to accept it. We just incorporated our own histories and creation stories into the oppressor’s religion. Which is why we see Mary as the Virgin of Guadalupe, and on the night of Jesus’ birth, we see our ancient clowns and diablos running rings around the couple.

In Anaya’s story, a young girl, Luz (Luz means light), wants to create lights to lure the Posada players to her home on Christmas Eve to continue her grandfather’s tradition of having the best luminarias in town. Christian tradition has Joseph and Mary looking for a place to stay, while Indigenous tradition adds another level of characters blocking their journey. It’s a wonderful story that involves the community along the way to the village church. The actors select the most brightly lit home to stage the play, after which everyone feasts on tamales and other traditional foods.

But Grandfather is ill, father is off working, and mama is cooking and preparing for the holiday, so Luz must solve the problem of creating a lighting system. She does so with much ingenuity and the help of her best friend, her grandfather and mother. Together, they make luminaries out of paper bags filled with sand, each holding a burning candle. And father returns home in time to join the festivities.

Anaya weaves Spanish words into the narrative in a natural way, and Gonzales' watercolor illustrations drive the story and help the reader feel the cold and see the mountains—and best of all, the Posada characters and the luminarias themselves.

I recommend Farolitos for a look at how those of us who live in New Mexico and most of the Southwest continue to incorporate our Indigenous traditions into Christian ones to reflect our cultures.