Many of the global conflicts we face today are the result of a cycle of violence and revenge that go back many generations. For instance, Ivo Andric’s classic novel, The Bridge on the Drina, translated from Serbo-Croatian and published in the United States in 1977, portrays generations of a Bosnian family from the late 1500s to the start of the First World War. Hatreds from medieval times have reproduced themselves over and over again, touching off the carnage in Europe in 1914 and again following the breakup of the former Yugoslavia in the early 1990s.

We see the same pattern in other political conflicts. A wronged party, unable to gain recourse from local, national, or international judicial systems, turns to violence. Those in power, or those targeted by the violence, respond with force, leading to further acts of violence in retaliation.

And on it goes.

We see the same patterns in our personal lives—neighbor pitted against neighbor, an argument in school that spirals out of control and leads to a fight with dozens of teenagers involved. And we wonder at what point could the violence have been stopped, the cycle broken.

I have been thinking about these issues ever since reading Francisco X. Stork’s novel, The Last Summer of the Death Warriors, and a couple of weeks later seeing the Academy Award-winning film The Secret in Their Eyes. In both cases, an act of violence destroys the life of a character, and in both cases, a character chooses to break the cycle. 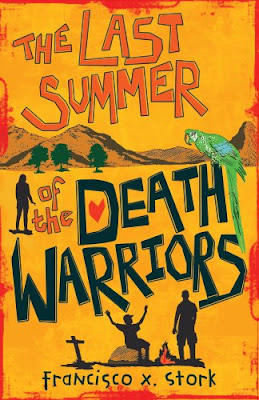 The Last Summer of the Death Warriors is loosely based on the classic tale of Don Quixote, but from the point of view of the idealistic knight’s humble squire. Pancho Sanchez finds himself in an orphanage following his father’s death in an industrial accident and, a few months later, the death of his developmentally disabled sister under suspicious circumstances. The angry Pancho was supposed to have been sent to a reformatory following a fight in a foster home in which he seriously injured another boy, and he expects that soon enough, he will be going to prison for a very long time. The reason is that he has pledged to hunt down and kill the man who took sexual advantage of his sister and caused her death.

Given a second chance at the orphanage, Pancho meets D.Q., an Anglo boy with terminal brain cancer. D.Q. is writing “The Death Warrior Manifesto,” his principles of living the time he has left to the fullest. As D.Q. is forced to undergo harsh chemotherapy at the bequest of his estranged mother—who brought him to the orphanage when she had a nervous breakdown following her husband’s death—Pancho becomes D.Q.’s helper and friend. Watching D.Q. struggle to achieve a life worth living, falling in love for the first time with the beautiful Marisol (who also happens to be D.Q.’s love interest), and remembering the wisdom of his late father, Pancho comes to realize that his own life may be worth living. He sees that an act of violence will destroy his chance for a future; as he writes to his sister: “After you died I didn’t care much for life. Now I think we need to take care of it.” And how he deals with the sex offender is equally remarkable.

In The Last Summer of the Death Warriors, the system doesn’t work for Pancho—in large part because he is poor and Latino and the man responsible for his sister’s death is Anglo and middle class. The failure of the judicial system in a vicious rape/murder is at the heart of The Secret in Their Eyes, an Argentine film that won the Academy Award for Best Foreign-Language Film in 2010. Once again, people denied recourse to a system trusted to be fair and consistent are tempted to take justice into their own hands. 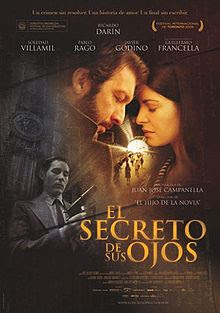 The Secret in Their Eyes follows a police investigator, Benjamin Esposito, as he pursues this vicious crime against a beautiful newlywed. Almost immediately after her death, two construction workers—one an immigrant from Bolivia, the other a poor Argentine—are brought into the police station. Visiting them in their cell, Esposito knows their confessions have been coerced, and with the help of the victim’s husband, he tracks down the real criminal. The young widower, Ricardo Morales, asks what the punishment will be. “Life in prison,” is the answer. Less than a year later, though, the criminal is released, due to his cooperation with authorities and his skill at hunting down “subversives” on the eve of Argentina’s Dirty War.

But one of the first “subversives” the released criminal hunts down is Esposito himself, who barely escapes Buenos Aires with his life. Morales is a second target, but in a brilliant twist, Morales (whose name foreshadows the role he plays in the film) exacts the justice that Argentina’s justice system—which goes from incompetent to corrupt to a perpetrator of crimes against humanity—is unable to accomplish.

Both of these creative works demonstrate the key role that a functioning judicial authority plays in breaking the cycle of violence. In the absence of such an authority, the pressure falls on individual peacemakers who make the conscious choice not to escalate the hatred. Recommended.