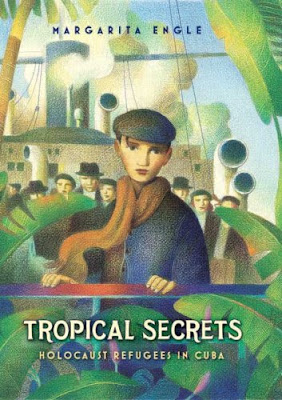 Newbery Honor-winning poet Margarita Engle perks up her readers’ interests with Tropical Secrets, her third well-researched historical-fiction novel written in simple, colorful verse. She immerses imaginary characters into a true, little known, horrific, anti-Semitic situation that took place in Cuba during World War II. The poems, told in first-person by three characters, focus on the period between June 1939 and April 1942.

The book begins with Daniel, a 13-year-old Jewish boy whose parents have sent to “the Americas” to save him from the Nazi Holocaust. First his ship sails to the US and then to Canada, but both countries turn the refugees away at the harbor. If Cuba does not/ allow us to land,/ will we be sent back/ to Germany’s/ shattered night? Cuba lets them land, and Daniel begins to struggle with language (I promise myself that I will never/ let anyone change the rhythm/of my name.), culture and loneliness.

Paloma, a Cuban 13-year-old who feels for the sad strangers, befriends Daniel, but her father doesn’t have her charitable heart. Rather, he takes advantage of refugees: No bribe, no visa.

David, an elderly Russian ice cream seller, becomes mentor to both Paloma and Daniel. Here Engel could have done better. Although David’s voice is older and wiser than Daniel’s, it’s confusing to the reader when names start with the same two letters.

Yet the characters are well developed, the story is intriguing, and the setting authentically transporting the reader to the true heart of Havana.

Daniel from the ship: This tropical heat/ is a weight in the sky/ crushing my breath.

Daniel speaking of David: He speaks to me with his hands dancing/ and his voice musical, just like the islanders/ who sound like chattering/ wild birds.

Daniel speaking about Havana: The city of Havana is never quiet./ Sleep is impossible—there are always/ the drums of passing footsteps/ and the horns of traffic/ and choirs of dogs barking;/ and orchestra of vendors singing/ and neighbors laughing/ and children fighting.

The historical details don’t stop with the refugees, some of whom had a “J” for Jew stamped on their passports. Through Paloma, we learn that orphan boys were taken to a Hershey ranch in the US and that in Cuba an orphan could find a home with any adult who happened to share the same name. And when I asked her why the carnival was in the summer and not before Lent, as it is in other Latin American countries, Engle told me: “In Cuba, the biggest carnival is after the sugar harvest. Originally, this was to avoid giving slaves time off. After the revolution, with highly publicized harvest quotas, the purpose was similar, to avoid giving time off during the busy season. Life is strange.”

Life may be strange, but Margarita Engle knows Cuban history and, in Tropical Secrets, she shares what otherwise we would have not learned. Tropical Secrets is highly recommended.