Knife and the Butterfly 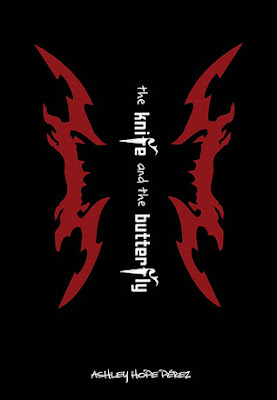 In 2011, I spoke on a panel with four other authors, on the topic of children’s literature and war. My part on children as combatants included G. Neri and Randy DuBurke’s graphic novel Yummy: The Last Days of a Southside Shorty, about an 11-year-old Chicago boy executed by gang members after he had shot a 14-year-old neighbor to prove himself to the gang.

This theme of gang warfare and the trauma experienced by young combatants in inner cities in the United States appears in Ashley Hope Pérez’s second young adult novel, The Knife and the Butterfly. Fifteen-year-old Azael Arevalo wakes up in an institution following a drug-fueled gang battle near his Houston, Texas, neighborhood. He doesn’t remember how he got there, but he fears he has killed someone and is back in prison. This, however, is an unusual prison, because his only activity appears to be watching a 17-year-old Anglo girl, Lexi Allen, as she writes in her diary and meets with her therapist, her grandmother, and her attorney.

In chapters from the past that alternate with Azael’s present, the reader learns that his mother has died and his alcoholic father has been deported to El Salvador, leaving him and his older brother to fend for themselves. Though he aspires to be an artist, Azael is the tougher and more violent of the two brothers; in fact, he brought his older brother into the notorious MS-13 gang.

A brief digression into the history of MS-13. The gang, originally known as Mara Salvatrucha, formed in Los Angeles in the 1980s with Salvadoran refugees who sought to protect themselves from Mexican-American gangs. The young refugees had fled a bloody civil war in their country between leftist guerrillas and right-wing government and paramilitary forces that enjoyed the support of the US government despite highly publicized human rights abuses such as the assassination of the Archbishop of San Salvador, Oscar Romero, and the killing or disappearance of thousands of clergy, teachers, intellectuals, and others.

In all, more than 70,000 Salvadorans died in the fighting that lasted for two decades until a peace treaty in 1992. Many of the refugees who became gang members were deported following the end of the war, and they established MS-13 in El Salvador; since then, the gang has recruited members throughout Central America and Mexico as well as in the United States. The trauma of one war has given way to the trauma of another.

Pérez’s novel moves into the supernatural as Azael reflects on his violent life. Unable to communicate directly with the mysterious Lexi, he reads her diary and draws her face and surroundings. He establishes a connection to her that moves her to take responsibility for her own role in the gang battle. Pérez has written a fascinating story that explores why young people join gangs and portrays the emotional trauma of taking part in these wars at home. Although Azael has suffered much and taken a dangerous path, readers will ache for his desire to leave some beauty in the world through his art, a goal he clings to even when everything he creates seems to be marred or erased. Recommended.