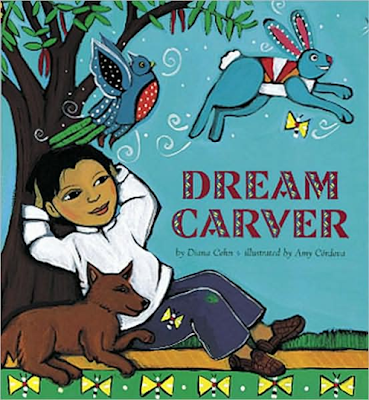 Beginning with a quote from Johann Wolfgang Von Goethe about following one’s dream (the author probably couldn’t find anything by Octavio Paz), Cohen has envisioned a picture book about a little boy in a small Mexican village who—following his dream—defies his father and breaks with his family’s generations-old tradition of carving juguetes, tiny wood animals for sale. Instead, he secretly begins to create brightly painted wood figures carved from copal, using the natural shapes of the copal to inspire the carvings. Of course, these figures become a great hit at the fiesta that follows, and the boy wins over the entire village, including his father, who asks that the little boy teach him “a new way to carve!”

The idea for Dream Carver, Cohen writes, was inspired by Manuel Jiménez, who is said to have been the “inventor” of this art form. But, whether one artist or a handful of artists began this relatively new folk-art phenomenon, it was not begun by a Mexican child in defiance of his father. And Mexican fathers do not generally reprimand their young children for “foolish dreams.” This book is culturally dishonest. And, since the Mexican people regard the Zapotec and Mixtec structures in Oaxaca as sacred, the term “Zapotec ruins” is a misnomer.

Córdova’s intensely colored paintings, rendered in acrylic and colored pencil, situate both the family and their stylized carvings in a contemporary Mexican art form, whose borders beautifully complete each page. But her talent is not enough to save this poorly conceived and poorly written book. Not recommended.