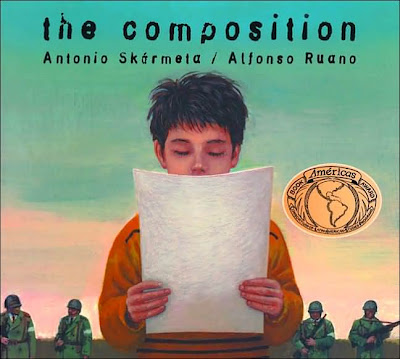 The acclaimed Chilean author’s short story about the dilemma of a young boy in a brutal dictatorship has appeared in various publications in Spanish and English, including A Walk in My World: International Short Stories about Youth (Anne Mazer, ed., Persea Books, 1998). This picture book version has been edited for young readers; both translator and editor have removed explicit language and specific information about the country where the story takes place.

Pedro enjoys playing soccer but is disappointed when his parents can only afford an inexpensive imitation ball. While he is playing with his friends one afternoon, police arrest his friend Daniel’s father for speaking out against the dictatorship. That night Pedro learns that his own parents are against the dictatorship and that they listen to clandestine radio programs at night. The next day, a military official comes to class and announces a mandatory essay contest with an award for the best essay. The topic: “What my family does at night.” Pedro wants to win a real soccer ball, but too many of his friends’ fathers have been arrested lately, and he doesn’t know what to write.

Even without the explicit words, the story has many realistic and earthy details that make it of special interest to boys. While the problems Pedro faces are unfamiliar to most children in the US, the appealing story and well-rendered illustrations make this book an excellent starting point for a discussion of human rights and of the way children have been used in many countries to inform on parents. Because of its origins as an adult/young adult story, this title is also an excellent choice for teenagers and adults who are learning to read in English. Highly recommended.