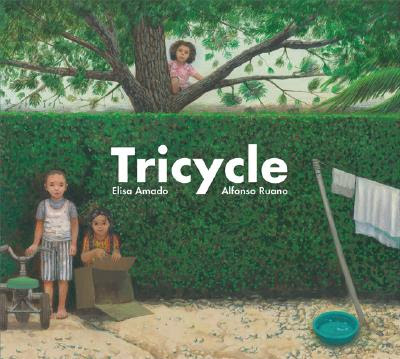 Margarita lives in a large house in an unnamed Central American country. Her family has plenty to eat and even has servants. On the other side of the hedge is the cardboard shack of the family from whom Margarita’s family buys tortillas. Margarita sometimes plays with Rosario, the girl from the other side of the hedge. One day, though, she leaves her tricycle outside, and Rosario and her brother steal it.

Margarita knows that she has much, and Rosario and her brother have nothing, not even a house strong enough to withstand a volcano. When her mother asks her about the tricycle, and a family friend says the poor are “thieves” and “should be shot,” Margarita lies to protect her less privileged neighbor.

The Guatemalan author offers a gentle, though thought-provoking introduction to issues of social class, poverty, and the responsibilities of those who have more. Margarita is just old enough not to need a tricycle any more, at an age when children become aware of social differences, injustice, and what it means to do the right thing. Families may have different takes on how she handles the theft of her tricycle, but the situation is realistic and universal. Ruano’s signature style, which served well Antonio Skármeta’s award-winning picture book The Composition, complements Amado’s quieter story as well. The illustrations set the book in Guatemala, with the native trees and the traditional weaving and clothing of the Mayan people.

Tricycle is also available in Spanish, El Triciclo. Both are highly recommended.