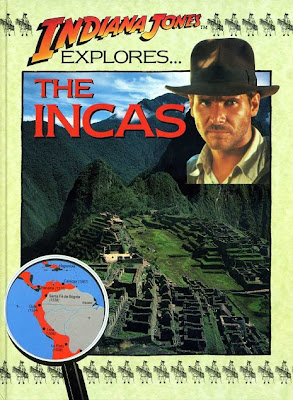 I have to admit that I am a fan of Steven Spielberg’s “Raiders of the Lost Ark” and that the idea of being guided through the world of the Inca by Indiana Jones did, indeed, sound interesting. That was before I actually read the book. Unfortunately, this approach does more harm than good.

The book is divided into sections dealing with the political structure of Inca society from farming to religion. It offers a lot of information, most of which is consistent with standard anthropological interpretations. I doubt that modern Inca agree with either the book’s attempt or approach in presenting their past and the “scientific” interpretations of their culture. And the descriptions of burial practices along with photos of mummified remains are hideous and disrespectful.

Little Indiana Joneses seem to pop up out of nowhere and add nothing to this otherwise formulaic book. In almost every two-page section is a photo of Indie taken directly from one of the movies and/or a small “fact file” supposedly written by him. These inserts have no direct connection to the material in the sections. Instead of becoming part of the “action,” these shots of Indie appear to have been randomly pasted on by one of the young people for whom this book is intended. The problem is that whatever respect one might have had for the Inca and their accomplishments gets chucked out the door as snickers and outright guffaws accompany the ridiculous juxtaposition of, for instance, a bare-chested, machete-wielding Indie above a scene of a local village bridge, or Indie again, in a white tuxedo with a bright red carnation in the lapel in front of a photo of a busy street in Lima. Not recommended.