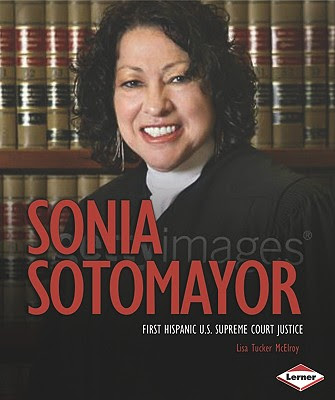 With well-organized and easy-to-read text, complemented by clear, bright photographs, this slim volume provides an honest account of Sonia Sotomayor’s life, including her pride in her ethnicity, her closeness with her family, and her mentoring of young people. Appended to this material are “fun facts,” a timeline of Sotomayor’s life, a glossary of legal terms to help the young reader, source notes, a selected bibliography, suggestions for further reading, and a helpful index.

The color photos—family pics, news shots and portraits—portray Sotomayor as she really is: a smart, vibrant, and lovely woman. There is nothing vague or indecisive in her face; all the reader sees is her energy and great humor, even in the photo where she is showing off the cast on her fractured leg. I especially love the look on Sotomayor’s mother’s face—“Is this for real?”—while she holds the Bible for her daughter’s swearing-in ceremony. And the early photos of Sotomayor’s parents and their moving to the Bronx show two people who are raising their children with the best they can provide. Another plus, which should be in every volume of this kind, is that each photo has both a caption and accompanying text.

For the most part, the text is truthful and clear—no “poor little disadvantaged girl made good” portrayal of this strong, brilliant woman. Besides the chronicle of Sotomayor’s early life and her way through high school and then Princeton and Yale on full scholarships, the author instructs the reader on the workings of the New York District Attorney’s Office, the US District Court, the US Court of Appeals, and the US Supreme Court. In addition, McElroy also discusses a few of the more important cases on which Sotomayor worked.

McElroy also writes about the vetting procedures, including Senate meetings and confirmation hearings Sotomayor had to endure. Here is the weak spot in this otherwise excellent biography: In two places, rather than critically examining the Republican campaign against Sotomayor, and their attempts to beat her down during her confirmation hearing, McElroy writes: “[O]ther senators and governors did not support her. They believed that her Hispanic background might cause her to make decisions to benefit Hispanic people,” and “Some senators still did not think that Sotomayor could be a fair justice. This was because she had once said in a speech that a Hispanic woman would make a better judge than a white man.”

Sotomayor’s original statement was: “I would hope that a wise Latina woman with the richness of her experiences would more often than not reach a better conclusion than a white male who hasn’t lived that life.” What she was saying was, in effect, that people’s life experiences inform their life choices. And what Sotomayor answered to the sharp questioning at the confirmation hearings, which McElroy quoted correctly, was: “I do not believe any ethnic, racial or gender group has an advantage in sound judgment.” Sotomayor was confirmed, and her statements reflected her strength in refusing to minimize her life’s lessons.

However, all together, Sonia Sotomayor: First Hispanic U.S. Supreme Court Justice is a well-done, personal and authentic look at her life and work. Highly recommended.