What the Aztecs Told Me 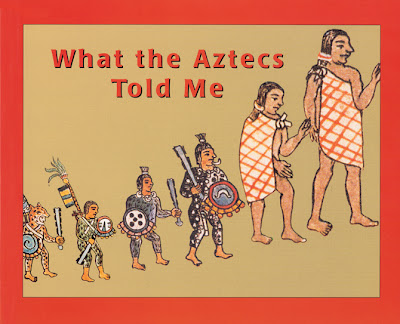 It seems that more and more American writers seek out the parts of other people’s cultures that they see as exotic or exciting. Maybe it is because they feel that their own lives in this “western” society are dull and monotonous. Unfortunately, this tendency has clouded the minds of those who write and teach from outside the culture. What the Aztecs Told Me is no exception. It tells about the Mexica or Aztec culture before the invasion of what we now call Mexico through the eyes of the Spanish friar, Bernardino de Sahagún.

As with so many other books on the “Aztecs,” this one seems fixated on the subject of human sacrifices. In fact, the first six pages of this 30-page book are about sacrifices—as if to say that this was the most important aspect of Mexica life. Accompanying Sahagún’s account are drawings by Spanish missionaries to justify the often brutal methods they used to force thousands of Mexica to convert from their “pagan” way of life to the “light” of medieval Christianity. As biased as all this material is, the authors never question Sahagún’s work.

Once we wade through what seems like overkill for any fifth-grade student, we are finally treated to scant descriptions of the day-to-day life of the Mexica. I wonder if the authors or the members of the Canada Council and Ontario Arts Council—the funders of this book—see the irony in their own words:

[T]he culture and events that Friar Bernardino recorded had almost disappeared by the time he wrote his work. Only a few elders remained who could remember Mexico before the Spaniards arrived. It is thanks to them that we can glimpse this vanished world.

Maybe, if Sahagún, Cortez, and their cohorts had not been so successful in “civilizing” the Native peoples of Mexico, we would have more such elders to learn from. Still, there are many elders throughout Mexico whose oral traditions dispute the Spanish accounts. If the authors had really wanted to show their respect for the Mexica, they would have sought out some of our elders, rather than retelling the invader’s accounts one more time. Not recommended.