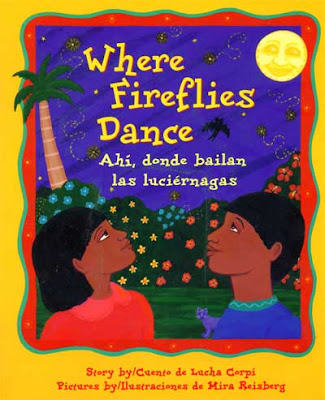 
In Where Fireflies Dance / Ahí, donde bailan las luciérnagas, Lucha Corpi shares an autobiographical story of her childhood in Jáltipan, Mexico, on the Caribbean coast. “Where Fireflies Dance,” she writes in an author’s note, “is that place where imagination and memory blend and take on new color and voice. It is my way of paying homage to my family and bestowing their legacy of culture and love on my son, Arturo, and my granddaughter, Kiara Alyssa.”

Here, Corpi weaves together disparate elements—a ghost story, a tale of a Mexican revolutionary, a childhood love affair with a jukebox, and her eventual decision to leave Mexico and immigrate to the United States—into a story that is natural and will appeal to children. The language flows well in Spanish and in English; in fact, it is difficult to tell which version Corpi wrote first.

Reisberg’s brightly colored artwork is simple, and evocative of the Caribbean area. Most of the borders look like the kind of embroidery one would find on Mexican dresses; others reflect parts of the story—the ghost story, the rainstorm, the music, and leaving Mexico for the US. Adding warmth to the artwork are family photos, combined with one of Juan Sebastián, the iconic portrait of Emiliano Zapata and the famous painting of La Virgen de Guadalupe.

Where Fireflies Dance gives us a gentle look into a different time and place, but brings out themes (fear of and fascination with ghosts, love of music, getting into trouble with parents) that will easily resonate with young children. Highly recommended. 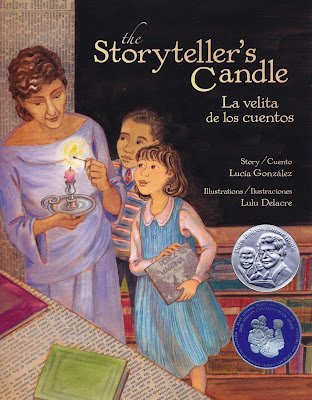 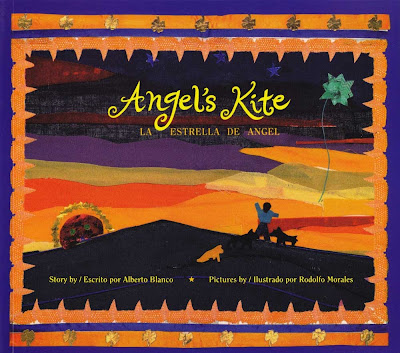