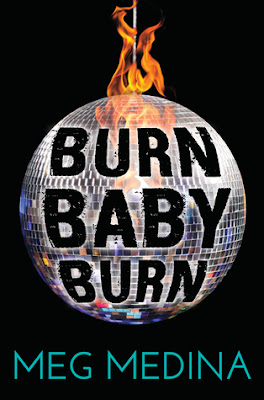 Between spring 1976 and summer 1977, the “Son of Sam” shooter David Berkowitz killed or wounded 13 New Yorkers, young couples who were sitting in their cars, in parks, or on the street. Until his arrest on August 10, 1977, no one knew who the shooter was. For more than a year, terrified New Yorkers suspected their neighbors and even members of their own families.

Meg Medina perfectly captures this climate of fear and suspicion in her new YA novel Burn Baby Burn, beginning with 17-year-old protagonist Nora López’s panicked walk home at night with her best friend, Kathleen, and their encounter with a stranger who turns out to be an undercover police officer and a friend of Kathleen’s father, a fireman. The policeman brings them home with a warning, but that’s only the beginning of Nora’s troubles. Her younger brother Hector, spoiled and excused by their single mother, has gone from truancy and disrespecting teachers to arson and domestic violence. Still, Nora and her mother refuse to tell anyone. They’re afraid of what the neighbors will think, and they search for every shred of evidence that Hector will pull his life together.

At work—a full-time job Nora juggles with school because she plans to move into her own apartment—she is attracted to the new guy, Pedro, but they have no place to go, lest they become victims of the mysterious killer whom Nora fears may be her own brother.

Compounding Nora’s isolation is the baggage her mother brings as an immigrant from Cuba. Nora’s mother was one of the first wave to leave after the revolution, and she idealizes what her life was like there in comparison with what she now faces with two teenage children, a vanishing job in a factory that makes audiotapes, and an ex-husband who is constantly behind in paying child support.

Although Nora finds a potential mentor of sorts in her downstairs neighbor, Black activist Stiller, Nora’s mother labels Stiller a “comunista,” and tries and partially succeeds in keeping Nora away from her.

In Nora, Medina has created a strong, memorable female protagonist who wants to become a carpenter and plays a major role in holding her family together. Yet the responsibility is always more than she can handle, for she cannot be expected to “save” or protect the community singlehandedly from a dangerous sociopath who batters both her and her mother. She struggles with both fear and guilt that contribute to her being silent too long, and her dilemmas will resonate with readers who harbor difficult secrets.

Vivid writing conveys with authenticity and interest the New York City of the 1970s, when economic distress, crime, drugs, and social unraveling threatened to destroy so many working-class neighborhoods. The Son of Sam killings and the July 13-14 blackout, fires, and looting were the best known examples, but the struggles played out in hundreds of thousands of homes, schools, workplaces, and streets.

As well, Medina’s dialogue skillfully blends the Spanish and English of a family in which some members are bilingual and some are not. For instance, while a fireman probes the neighbors about a suspicious fire, Nora condenses the conversation for a shaken Mima:

And when Stiller offers to bring Hector, who is in a drug-induced stupor, to the hospital:

“Es una borrachera, na’mas,” Mima insists, although I don’t smell any alcohol on him at all. Then she turns to me: “Nora1” Her voice is sharp. “Tu hermano.”

An excellent author’s note places the story events in the larger historical context, explains what is fact and fiction, and offers respect to the victims of these horrific crimes. Burn Baby Burn is highly recommended.

A somewhat different version of this review appeared in The Pirate Tree (www.thepiratetree.com). 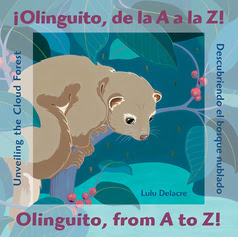 Unlike most other bilingual books for children published and marketed in the US, Delacre’s elegant alliterative verse forefronts the Spanish and follows with an English interpretation—“Alto, allá arriba en los Andes brilla un bosque bordado de bromelias… /  High, high up in the Andes blooms a brilliant forest embroidered with bromeliads…” Another “rarity” is that no words are italicized, so that both the Spanish and English texts are equally important.

Delacre’s exquisite mixed media illustrations consist of collaged printed patterns in flat acrylic colors on a background of watercolor paper, and leaves and ferns from the cloud forest dipped into ink and pressed onto textured rice paper. As well, each double-page spread contains two letters—one on the left page and the subsequent one on the right—pasted on vellum paper and carefully placed so that, along with the text on the bottom panel, they virtually melt into each overall image. The result is a gorgeous palette of bright, flat tropical colors and lyrical text that represent the amazing cloud forest and its denizens.

For Delacre’s detailed description of the media she used and her process, see: http://blog.leeandlow.com/2016/02/03/authorillustrator-lulu-delacre-take-us-behind-the-art-of-olinguito-de-la-a-a-la-z-olinguito-from-a-to-z-descubriendo-el-bosque-nublado-unveiling-the-cloud-forest/.

Back matter—all in Spanish and English—includes articles about the Ecuadoran part of the cloud forest and the discovery of the olinguito in 2013, a comprehensive glossary containing the scientific names of all the forms of life pictured (and “more helpful words”), Delacre’s note about her research and art, and an extensive list of sources.

There are also suggestions to children about how they can “explore” the pages of the book, and teaching possibilities are, as are the lives inhabiting the cloud forest itself, many and varied. And Olinguito is not the only elusive creature in the cloud forest—each luminous double-page spread hides a tiny image of a zoologist who is looking for the furry little guy—so young readers can be encouraged to have a “search and discover” experience of their own.

But, perhaps more important, there are “hidden” lessons here about art and life. I hope that we, as humans, will encourage our children to regard ourselves—like Delacre’s tiny zoologist—as a very small part of a perfect universe. Como antes, ahora, y en el futuro. ¡Olinguito, de la A a la Z! Descubriendo el bosque nublado  / Olinguito, from A to Z! Unveiling the Cloud Forest is highly recommended.