Young Diante desperately wants to play in the pool with the other children, but he’s afraid to put his face in the water. “I wish I could play like them,” he sighs. “They glide like fish. They don’t seem to mind water on their face.”

[Note: There are three children in the pool, and one on the deck. None of them is swimming and there’s no water on anyone’s face. And, except for flying fish that propel themselves out of the water, fish don’t glide. They swim.]

Meanwhile, Grandma, who practices yoga, confides in her grandson that she is afraid to adopt the “peacock” pose, for which she’d have to be upside down. Grandma teaches Diante the basics of Pranayama, which she refers to as “special breathing,” and the two practice together. On his first solo try, Diante performs a perfect “peacock pose.”

But when Diante holds his Grandma’s legs up for the “peacock pose,” she’s unable to do it, because she’s afraid, you know, of being upside down because she doesn’t want to fall over. “That’s okay,” the child mansplains to his silver-haired Grandma. “You tried.”

Now, having mastered the peacock pose (that, remember, could take years but took him only one try), young Diante is ready for the ultimate challenge: putting his face in the water. To accomplish this feat, he “remembers” Pranayama (the breathing technique that Grandma just taught him). Still, it takes him five pages to put his face in the water—of what appears to be a fairly shallow pool.

A fish who overcomes its fear of water?

Feidler-Aguilar’s bright acrylic artwork complements the story. Except for the gorgeous cover, Diante, Grandma and the other characters are inconsistently and clumsily drawn, with out-of-proportion features, including facial and physical details. (On the cover, Diante appears to be about five years of age, and the interior pages portray him as veering between eight and twelve.) And an annoying peacock—a symbolic representation of the “peacock pose”—appears as a design element on almost every page.

On every level, Brave in the Water // Valiente en el Agua is logically weak and likely to be confusing to children. It’s not recommended.

Clap When You Land 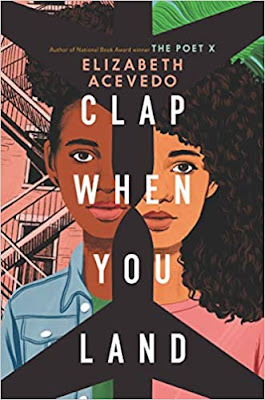 Two months after the 9/11 attacks in New York City, an American Airlines flight bound for the Dominican Republic crashed shortly after takeoff from JFK Airport. Many feared another terrorist attack, and the determination of mechanical failure as the cause did little to assuage the trauma in the neighborhood where the plane crashed, in the Dominican Republic, and in the immigrant community of Washington Heights where Elizabeth Acevedo lived. This event became the inspiration for her third YA novel.

Like her acclaimed debut The Poet X, Clap When You Land is a verse novel. It’s told in the alternating points of view of Camino Rios in Sosúa, Dominican Republic, and Yahaira Rios in Washington Heights. Camino and Yahaira are half-sisters about the same age, but at the beginning of the novel, they don’t know it. All they know is their father died in a plane crash en route from New York to Santo Domingo. Camino receives money from her father that allows her to attend private school and harbor dreams of studying in the U.S. to become a doctor. Her father’s money also pays off a local gang leader to keep her safe, which she realizes when she flees her house of mourning and the gang leader pursues her:

I want nothing to do with the crowing roosters,

or the viejos lighting candles & Tía watching the news

& the prayer circles, & the watchful eyes, &

the whispers about Papi being dead.

But whatever it is El Cero wants from me

I know it will be worse

than the momentary discomfort at Tía’s house.

Because El Cero will attach conditions to his condolences.

Yahaira and her father share a love of chess and the bonds of family and friends…until she discovers a marriage license that belongs to him and another woman. The discovery drives a wedge between them, so that when he dies, Yahaira doesn’t get the chance to hear his side of the story or to say goodbye:

the reason my father left me,

the family he left behind.

& when he returned last summer,

I didn’t know how to look

him in the face & pretend.

So it was easier not to look at him at all.

When the only words I owned

were full of venom, it seemed better

to stop speaking to this man

since the only option was to poison us all.

For Camino, her father’s death has more practical consequences—the loss of her dream and the fear of violence and sexual exploitation without his protection. When Yahaira tracks down Camino on social media and then travels to the Dominican Republic with her father’s remains, she and Camino discover what they have in common and what they must do to salvage the best of their father’s legacy while accepting his flaws.

Acevedo’s novel is a moving account of disillusionment, grief, and reconciliation. Camino and Yahaira narrate in distinct voices—Camino in three-line stanzas that capture the slower cadence of life in Sosúa, and Yahaira in staccato two-line stanzas that depict her life in New York City. The novel shines brightest when the two sisters come together, their voices sometimes crashing against each other, sometimes intertwined, as they navigate their suddenly ripped-apart and reconstituted family. Secondary characters—Camino’s curandera aunt, Yahaira’s frazzled mother who discovers a newfound take-charge attitude, and Yahaira’s girlfriend and her family—add texture to the relationships and the story. Well-thought-out details of book design contribute to the reader’s understanding of Camino and Yahaira’s different worlds. 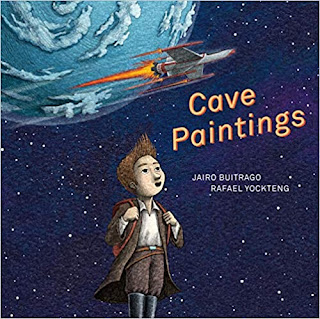 As with their other picture books (Two White Rabbits, Walk with Me), the team of Buitrago and Yockteng, with Amado translating, have created another outstanding story that will resonate with the youngest readers and listeners.