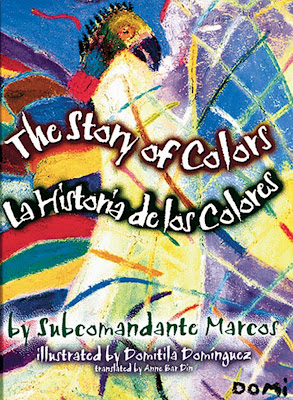 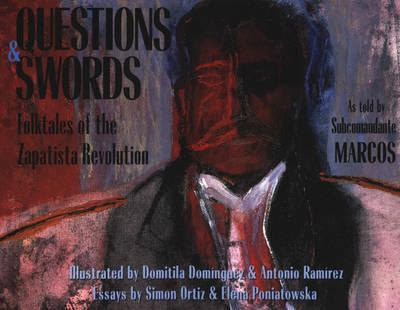 On the back of this book's striking cover appears a little tag: “The sequel to the infamous STORY OF COLORS.” And that's what it is, plus more. “Infamous” because The Story of Colors, Marcos’s previous book, encountered a blatant attempt at censorship—by the National Endowment for the Arts—before it was even published. The attempt failed, and the publicity guaranteed that book an extra print run.

Like that book, Questions & Swords is illustrated by “Domi” (Domitila Dominguez) who again gives us a stunning range of colors, moods, and imagination. The text is a more complex, even elusive creature than the first Marcos volume, with several voices to be heard and ambiguities to ponder.

“The Story of Questions,” which is bilingual, brings us old Antonio again with all the same wisdom, charm and humor we have a right to expect from his role in the previous book. But this time his words to Marcos defy even “el Sup” in a conversation about who Zapata was. To answer that question, Old Antonio tells the story of two gods who were opposites but really one, and struggled to resolve their differences with many questions about how to walk together, which path to choose. He draws out a profound message:

[Q]uestions are for walking, not just standing still and doing nothing…[W]hen true men and women want to walk, they ask questions. When they want to arrive, they take leave. And when they want to leave, they say hello. They are never still….[T]o know and to walk, you first have to ask.

When Marcos asks how this defines Zapata, old Antonio replies that Zapata speaks of two Zapatas who are really one and both were the same road for all true men and women to follow. A reader can be left wondering if perhaps this whole story is about leadership, the need for flexibility and openness. Or perhaps it is a lesson in dialectics? Or both? What matters is that we have been captivated by vision with deep Indigenous roots.

The other major piece in the book, “The Story of the Sword, the Tree, the Stone & the Water,” also stars Old Antonio. It is an “ethical metaphor,” as author Elena Poniatowska says in her short essay following that story. When those four different sources of strength go into battle, water triumphs in the end. Similarly, as Marcos observes, the Mexican government's February 1995 offensive against the Zapatistas made a lot of noise but like the sword, ended up rusting in the water and growing old. The water follows its own path and never stops.

The book then offers a short piece by Acoma poet and essayist Simon Ortiz, “Haah-ah, mah-eemah / Yes, it’s the very truth,” in which he speaks about the effects on Indigenous peoples in the United States when word spread of the 1994 Zapatista rebellion: “[T]he news from the South was good news!” All over the Western Hemisphere, he says, Native people have had to survive against 500 years of deadly foreign domination but they have maintained a sense of continual cultural identity that is the essence of Existence. The signal from Chiapas is clear and Simon Ortiz dares to dream, as he says, of what might happen: “What if Indians throughout the Americas rose in united force to seek the return of their land, culture, and community? Think of it!”

Mexican author and journalist Elena Poniatowska closes the book with the eloquence that has made her work respected and loved for decades. “Can a book explode like a bomb?” she asks. “Can it change minds? Should a government feel threatened?” The answer could not be clearer.

The idea of books having such power sustains El Colectivo Callejero (The Street Collective), dedicated to the expression of left political thought through art in Mexico, whose main founders are Antonio Ramírez and Domi. “Old Antonio,” indeed, we might suspect. And perhaps it is no accident that Domi, whose work makes this new book so vivid, so strong, bears the same first name as Domitila Barrios de Chungara of Bolivia. A tin miner's wife representing the “housewives' committee,” she electrified the UN Tribunal on Women in 1975 in Mexico with her cry of “Let me speak!” to the mostly middle-class women present. In Questions & Swords, Domi's art is also an unforgettable outcry. Highly recommended.