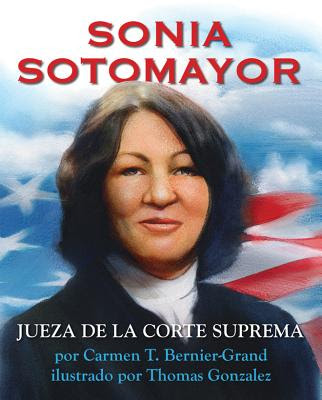 Bernier-Grand’s elegant free verse shows, rather than tells, stories from the life of the first Latina Justice to be elected to the US Supreme Court. This is, in a sense, a family album of snapshots.

Here is baby Sonia, born “a Nuyorican, as American as mango pie.” Here she is as a three-year-old, speeding on her tricycle, about to scrape a freshly painted wall, because “tranquil Sonia is not.” Here is Mami, leaving food on the stove, in case the kids get hungry before she returns from work. Here is her Papi, who “makes the best mofongo in the South Bronx” and takes Sonia to baseball games.

Here are Sonia and her cousins in Bronxdale, “the core of her universe.” In Bronxdale, where the buildings look like dominoes, the cousins play bingo with chickpeas, while Papi cooks and Mami and the Tias dance to the rhythm of the merenge on the record player. Here is Sonia vacationing in Puerto Rico, savoring a sweet syrupy piragua, playing jacks with her cousins, and being lulled to sleep by the “kokee-kokee” songs of thousands of tree frogs.

Secure in the arms of a loving extended family and community, Sonia’s life, still, is not without struggle. In primary school, she hides a “shameful secret: Words in English have no meaning,” and at Princeton, she can “barely write a college paper.” But, as hard working and doggedly determined as her Mami, Sonia pushes herself and “finally conquers writing.” There have been many more battles in Sonia Sotomayor’s life; she has been through a lot and has emerged as, indeed, a “wise Latina” who brings to the Supreme Court bench a perspective rarely seen.

To add to but not overburden the picture-book format, Bernier-Grand includes a helpful appendix with a short biography, glossary of Spanish terms, chronology, bibliography, and source notes.

Gonzalez’s mixed-media artwork includes pastels, technical pens, and airbrush. The pictures that have been copied from actual photos especially complement Bernier-Grand’s textual “snapshots.” At the same time, several of the pieces show only the back of Sotomayor’s head, or a side view that does not show her face, or a wedding picture seen from the back, or her hands, literally “touching the sky.” These are off-putting and do not fit with the “snapshot” quality of the others, and I wonder why they were done this way.

In truth, Sotomayor’s face is very hard to capture. She’s a big, strong, Latina. She’s tough— always has been. In virtually every photograph I’ve seen of her as an adult, she has a full smile, sometimes forced. But in the cover illustration, Gonzalez softens Sotomayor’s appearance: in her judicial robes, she looks at least 20 years younger, her face is thinner, her hair is straighter, her mouth is closed, and she’s lost her under-eye puffiness. And the American flag and clouds behind her add an unnecessarily romantic touch.