Red Ridin’ in the Hood and Other Cuentos 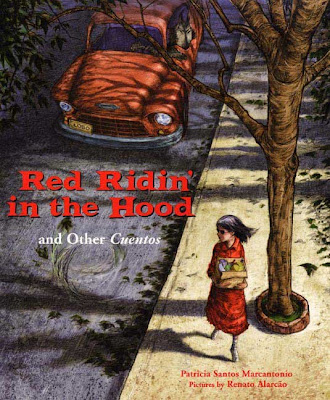 While the premise of infusing popular European-based fairy tales and other stories with Raza cultural markers is imaginative and can result in a good outcome, Santos Marcantonio’s attempt to do so results in writing that is uneven and mostly falls flat.

I chuckled while reading “Red Ridin’ in the Hood,” especially at the repeated reference to “white goat cheese that smelled like Uncle José’s feet” and the picture of a horrified young Roja, holding her nose against the smell of the cheese. But the story asks young Raza readers to totally suspend disbelief to the fact that, not only would a Chicano wolf named “Lobo Chavez” be cruising around the barrio in a low-riding Chevy, preying on grandmas, but, most unbelievably, that police would actually come into the barrio in order to help a little girl and save the day.

Although her telling of “Belleza y La Bestia” almost fails, Santos Marcantonio’s setting it in the context of the Mexican Revolution saves it. Here, an aristocrat who supports the Emperor Maximiliano is turned into a hideous beast by a bruja, because he has no soul. The curse is broken—and he becomes human again—because of a beautiful young woman who is a defender of the Revolution. “True ugliness,” she tells him, “can be found only in the hearts of people who hurt others.” The didactic moral notwithstanding, the story works for me.

However, in most places, Santos Marcantonio breaks the first rule of writing: Show, don’t tell. In “El Día de los Muertos,”—a Mexica retelling of “Orpheus and Eurydice,” the description of the courtship sinks like lead: “Every day afterward at the market…[Xochiyotl] would always stop to talk to Nochehuatl. They shared laughter, a reverence for life, a respect for the gods, and a strong connection with family.” Apparently, the author can’t imagine a real conversation between two young Mexica people.

Many of the author’s descriptions are heavy-handed as well: The lizards, for instance, in “The Piper of Harmonía,” are “green as deceit,” and in “Alejandro and the Spirit of the Magic Lámpara,” the antagonist’s “greed was as thick as the mud alongside an irrigation ditch.”

Just about all of the morals, too, are didactic and boring. In “Emperador’s New Clothes,” a haughty teenager gets his comeuppance, immediately after which he takes a vow “right on the spot” that he would no longer judge his peers by what they wore. “Soon, Emperador was no longer called El Rey, but El Corazón, because he showed others that he had a king-size heart.”
Also, there’s the kind of dissonance that had me turning back the pages to see if my first impressions were correct. In “Juan and the Pinto Bean Stalk,” for instance, Juan’s mother works at a laundry and they have to buy food, so they probably don’t live in the countryside. But wait! They have a cow! Do they keep her in the backyard or what? Then there’s this: “Juan was tired of eating beans, eggs, and tortillas every day.” If they live in the barrio, eating such nutritious foods would not be a sign of poverty. So what’s the deal?

I also object to animal stories in which the protagonists refer to themselves as food. This all started for me as a young child, when I discovered the connection between Shari Lewis’s puppet’s name, Lamb Chop, and what it actually referred to. In Santos Marcantonio’s version of “The Three Little Pigs,” the pig brothers, having outsmarted the wolf (but not, of course, killing him as in the original story), establish a place called “Residencias Chicharrones”….

Renato Alarcão’s black-and-white pictures are sometimes comical and sometimes dramatic, but may not hold the attention of youngsters who have been programmed to pick up books that are brightly colored.

There are many, many versions of Raza stories in print, both traditional and contemporary, that Raza children could appreciate. I’d recommend Bobbi Salinas’s hilariously told and riotously illustrated The Three Pigs: Nacho, Tito, and Miguel/Los tres cerdos (Piñata, 1998), and her Cinderella Latina/La Cenicienta Latina (Piñata, 2003). Plus, they’re bilingual. So, Red Ridin’ in the Hood is marginally recommended, if at all.