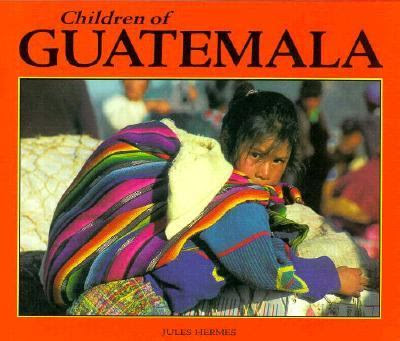 Children of Guatemala is an interestingly uneven book. It is not blatantly patronizing or ignorant; the author is really working at being an observer, even though he constantly shows his frame of reference—downtown Minneapolis. For example, he says that “[t]he market offers a break from everyday work and gives friends a chance to catch up on the latest news.” Jules! No, wait! The market is the goal! The object of the week's labors! The place to sell what you produce, to trade for essentials, to buy what you need to feed your family! Then, it is a place to hear the news, to catch up on important events, and, always, a place to socialize. It's not the mall!

On the other hand, Hermes is not afraid to discuss political situations, from the horrible 1990 massacre by the government in Santiago Atitlán, to the 80,000 Maya who have been brutally murdered by their own government since 1978, the longest “civil war” ever. He also talks about the lack of government support for public education and shows teachers and students picketing for quality education.

Hermes ought to have mentioned Rigoberta Menchú, the Mayan hero who won the Nobel Peace Prize for her unflagging quest to educate the world about Guatemala’s genocide against its indigenous peoples. That would be the logical extension for study from this beautifully photographed book. Marginally recommended.