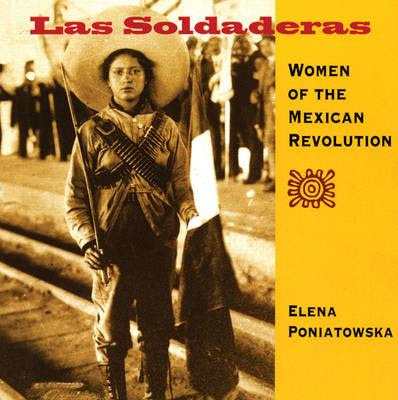 Las Soldaderas is a book of iconic photos of the women soldiers of the Mexican Revolution. These photos have been available in textbooks, calendars, and posters for years and have taken on mythic proportions among freedom fighters the world over. They suggest brave, strong women fighting shoulder-to-shoulder with their men to oust a dictator and secure land for the common people. Here are the women at train stations, tearfully bidding their men goodbye. Here are the soldaderas with bandarillas crossed over their chests, fighting alongside their men. Here are the soldaderas, posing with their men in triumphant victory scenes. Here are the soldaderas, dressed as men, brandishing weapons; standing with the revolutionary general Emiliano Zapata; and in tender scenes with their men and children. Here are photos of La Adelita—a hero about whom a corrido is sung—giving her soldier one last embrace before the train takes off, appearing exhausted as she sits on the roof of the troop train, and triumphantly riding into Morelos.

Along with the corridos, I grew up with these photos and dichos from the revolution such as Zapato’s “Es major morir a pie que vivir a rodillas” (“It is better to die on your feet than to live on your knees”). I saw the soldaderas as heroes of the revolution, women to be admired and emulated by modern-day revolutionaries. These women to me represented Zapata’s cry for “reforma, libertad, ley, y justicia” (“reform, liberty, law, and justice”). The vivid photos here show the lives of ordinary women—with a rifle in one hand and canasta of provisions in the other—protecting their families, their communities, their country. They typify the Mexican woman as fiercely protective and show the love and strength of a woman fighting for her country while feeding her soldier. These particular photos—especially since most of the other revolutionary-era photos document only the men who fought in the revolution—are national treasures.

But I am confused about the purpose of Poniatowska’s problematic text, which doesn’t even describe the photos. Containing a litany of unflattering, even disgraceful descriptions of the soldaderas and little else, it’s more an uncritical literary analysis of the contemporaneous novels and corridos than the stories of the soldaderas themselves. Not only doesn’t the text live up to the iconography of the revolucionarias, determined to fight with and for their men and their nation, but rather, it portrays the women as anonymous camp followers and prostitutes—poor, uneducated Indian refugees with no choice but to throw their fate in with the male soldiers.

For instance, Poniatowska quotes Heriberto Frias, a federal lieutenant, who wrote his own account of the soldaderas to expose government atrocities, published serially in El Democrata.

The women, the soldaderas who followed their men like slaves, and at times would go ahead of them in search of provisions, told of stupendous and wonderful events. Those dusty, filthy, ragged females, those brave human dogs, wearing huaraches, carrying heavy baskets filled with pots and pans, marching at a trot in front of the column, appeared like a migrating horde. . . . They were a source of both tenderness and horror….Their dark, haggard faces, their shrew-like appearance, their rapacious hands. They were a sinister and tortuous vision. . . .mirthful, unrestrained, inebriated, swarming the public plazas, the barrios of Mexico, bathed in filth, lust, homemade hooch and pulque.[1]

It’s difficult for me to make sense of statements such as this. Did Poniatowska use them as exemplars of what was written to counter government propaganda? The history I knew had American newspaper editor William Randolph Hearst as the bad guy in the middle of all this, using his renowned “yellow journalism” to sell papers. For this very reason, my family refused to have Hearst newspapers and magazines in the house. With his anti-union, anti-democratic views, and his biased, jingoistic approach to the wars in the Philippines, Cuba, and, of course, Mexico, Hearst could have written this kind of thing for his own circulation. Poniatowska does not help us understand or care for the soldaderas; rather, by her lack of critical analysis, she seems to perpetuate the negativity.

And Poniatowska adds to the dissonance by inserting her own metaphors, some of which border on pornographic. For instance, there’s this:

The locomotive is the great heroine of the Mexican Revolution. She too is a soldadera who moves with confidence, huffing and puffing, arriving late, true, but only because she’s overloaded. She lets off steam and comes to a stop at the platform so that the men can penetrate her again with their rifles held up straight. There the troops get on and sit on top of her. She bears everything. That’s why the enemy forces want to blow her up to the sky.

In truth, the soldaderas made conscious decisions to accompany their men, or were women whose villages were attacked and destroyed by the government forces and had to flee to protect their families. The photos are not portraits of the downtrodden but of women who were keeping their families together, women who upheld traditional family values and stood with their men. Yes, there were prostitutes among them. There were also women who were vendors, women who had been kidnapped and forced to travel with the soldiers. But in a book of photos of the soldaderas, I expected a tribute to them as revolutionaries. I was also disappointed that Zapata’s Army of the South, which included women at all levels—up to and including generals—was not even mentioned:

Zapata’s army was unique in that he allowed women to join the ranks and serve as combatants. Although other revolutionary armies had many women followers, in general they did not fight (although there were exceptions). Only in Zapata’s army were there large numbers of women combatants: some were even officers. Some modern Mexican feminists point to the historical importance of these “soldaderas” as a milestone in women’s rights.[2]

The soldaderas were rough, tough Indian women—sisters, wives and other relatives—accompanying their men into battle, tending the wounded and doing whatever else was necessary. These brave women were referred to as “soldaderas” because they were female soldiers, not camp followers. These are the women I think of when I think of the Mexican Revolution—the women who made their mark in the fight for tierra y libertad.

Although Poniatowska comments that, “if not for the photography of Agustín Casasola and Jorge Guerra and countless rolls of celluloid by Salvador Toscano, we would know nothing about the soldaderas because history has not treated them kindly—in fact, it has denigrated them,” she actually does the same thing.

That Poniatowska is known for her amazing work on behalf of the disenfranchised and poor of Mexico (see, for instance, her essay, “Can a Book Explode Like a Bomb?” in Subcomandante Marcos’ Questions & Swords: Folktales of the Zapatista Revolution)[3], compounds the difficulty for me. She’s worked with the Zapatistas in Chiapas, who are currently involved in a struggle for land for the people—a struggle quite similar to that of the earlier Mexican Revolution. Yet she doesn’t even mention here that their namesake, Emiliano Zapata, was himself promoting women to high ranks in his Army of the South.

Because the photos in Las Soldaderas are so rich and full of humanity, they could be used in a history or language arts class, to ask essential questions about them: “What do you see?” “Who is this woman?” “What story does this photo tell?” The text could be used for critical thinking queries, to launch research into the topic of contemporaneous writings about Mexican women in history. I might recommend Las Soldaderas for secondary school and college classes, for guided reading and discussion about the photos and text. It could also be used as a springboard to compare and contrast with Poniatowska’s books and articles on the contemporary Mexican struggle for tierra y libertad. But, as much as I wanted to, I can’t, in good conscience, recommend Las Soldaderas as a whole, as a book to enjoy.