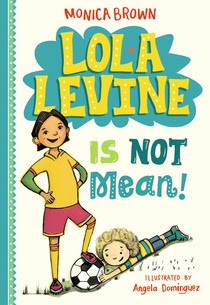 Watch out, world! Here comes Lola Esther Levine, a super-smart, exuberant Catholic-Peruvian-Jewish-American second-grader: a diario writer, poet, soccer player and drama queen who practices Spanish and speaks her mind in breathless (mostly know-it-all) spurts. Lola eschews the dominant elementary-school mores: her super best friend is a boy, and she feels strongly that “boys and girls should look however they want.”

Aware that she may be regarded as opinionated (which she is), our young protagonist makes sure to insert the phrase “in my opinion” into much of her narration. She has other endearing self-imposed limitations as well: Because her mom has told her that “hate” is a strong word and she’d rather her daughter didn’t use it, Lola creates a reasonable substitute (e.g., “Cauliflower is another food that I dislike very much”). One of the other things she dislikes very much is the longer form of her name, “Dolores,” because, in Spanish, it translates as “pain.”

Lola and her bratty younger brother, Ben, have inherited their arts and smarts from “the most awesome (parents) in the whole wide world”: Dad is an artist who encourages creative expression, and Mom is a newspaper writer who has, as Lola says, “lots of opinions about words.”

When Lola, who is known school wide as a fierce goalie, gets in trouble for slide tackling and accidentally hurts a classmate in a recess soccer game, she acquires the rhyming nickname “Mean Lola Levine,” which she dislikes very much. How Lola—with a little help from her best friend and a science project that involves burying worms in garbage with her worst enemy—conquers being bullied, is a main theme of this first in a series of chapter books for young readers.

Domínguez’s spare black-and-white drawings nicely reflect the ethnic mix of the community’s children and adults, including the Levine children’s mixed parentage: While Lola’s straight dark hair and brownish complexion more resembles Mom’s, her younger brother Ben’s light curly hair and fair complexion looks more like Dad’s. I especially like the image of the family, sitting around the small dinner table, on which is dinner: matzo ball soup, Peruvian chicken, and flan.


Although Brown seamlessly weaves foreign terms such as diario, tía, buenos días, café con leche, bubbe and shalom into Lola’s narrative, the fact that they’re italicized breaks the rhythm. Note to publishers and editors: Please italicize foreign terms only if they’re supposed to be emphasized. 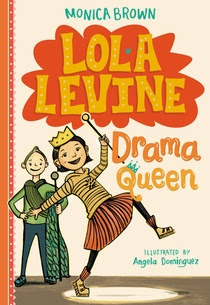 In Lola’s second adventure, she confides to her diario that her thoughts are “like monkeys jumping up and down in (her) head” and “sometimes (her) monkeys are swinging from trees.” Here, the otherwise fearless youngster has to audition for the class play in front of EVERYONE and, though she’s a fiercely competitive soccer player, Lola can’t decide whether she likes acting class, or what to perform for the audition. With her mom’s help—which consists mainly of answering questions with questions—Lola decides to perform a monologue about the great activist and organizer, Dolores Huerta.

Lola turns out an awesome rhyming monologue that lends her the confidence she needs for the audition. But it’s not enough—overcome with stage fright, she freezes and is assigned a non-speaking part, as Squirrel #2. And, as the curtain rises on opening night, Squirrel #2 finds herself in the middle of yet another disaster, something that appears humiliating and unfixable. Until her bubbe, as bubbes do everywhere, literally comes to the rescue. What happens is both hilarious and heartwarming, and I’m tempted to disclose the ending, which I won’t. (OK, let’s just say that Lola’s facility for quick thinking and extemporaneous rhyming—combined with that of her bubbe—comes in handily during the play.)

Lola Levine, Drama Queen—as with its predecessor, Lola Levine Is Not Mean—will resonate with young listeners and readers who will look forward to Lola’s next adventure (which I’d be willing to bet will have a rhyming title as well). Both books are highly recommended, in my opinion.