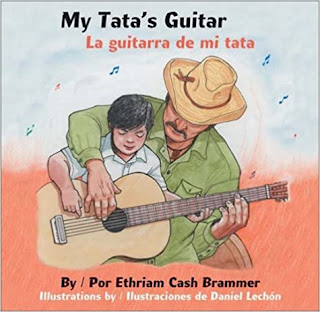 Narrated by a child who finds an old guitar while exploring “the mazes of boxes and discarded furniture” in his tata’s dusty garage, this warm story of family and community takes young readers into the lives of a Chicano child and his Mexican tata—and how music and culture are passed from one generation to another.

Lechón’s attractive, full-page pen-and-ink and watercolor illustrations, mostly in primary colors—are as gentle as the story. Although each scene is framed, in most of them, the characters step out of the frame. Since this story spans several generations, the artist circumvents confusion by assigning specific colors to the clothing of each character. For instance, the child narrator wears a black shirt, his tata wears a white shirt (as does his tata as a child), and his tata’s tata wears a green shirt and sometimes a sombrero.

The short, boxed English text on top and the Spanish below both read with a rhythm that youngsters enjoy. (Since this is a story about a Mexican American family, forefronting the Spanish text would have been a benefit.)

Rather than an attempt at literal translation, for the most part the English and Spanish texts appear as similar versions of the story or scene. For instance, in showing Tata’s grandpa and others in the community playing in the posadas, the English text reads:

“My tata played in the posadas every Christmas. ‘In the name of Heaven, won’t you give us shelter? My dear beloved wife, tonight can go no further.’ ” And in the Spanish text is the traditional rhymed Mexican version:

In both of the group scenes—the people gathered together to portray las posadas navideñas and children celebrating a friend’s birthday—the people are shown with varying skin tones and hair color and textures that reflect the Indigenous and colonial heritages of the Mexican and Mexican American people.

And when the story focuses on the music that Tata’s tata plays, he’s shown as singing Mexican songs in Spanish that are compatible with well-known American songs. As a young man, he serenades the young woman who will soon become his wife. “Dulce amor de mi vida, despierta, si te encuentras dormida” (“Sweet love of my life / wake up if you find yourself asleep”) is well matched with the English: “I’m in the mood for love / simply because you’re near me.”

And, while the child’s tata relates the story from his tata of when the family came to the United States from Mexico, there’s a beautiful scene of farmworkers, wearing woven straw sombreros, sitting around the campfire after a hard day of labor. They sing the traditional Mexican song, “Cielito Lindo” (“Ay, ay, ay, ay, canta y no llores…”).

As Tata gently and lovingly passes on the music of his culture, musical notes and moths flit out of the guitar and transform into butterflies and flowers and fill the background. In gifting his young nieto with the family’s guitar, Tata both passes on a family treasure and transmits the cultural history of the community.

As Tata gifts his nieto with this guitar—as his own tata did with him—it becomes more than “just” a gift from grandpa to grandson. Rather, his tata’s guitar is a gift from and for the generations. It’s the gift of love, the gift of language and song, the gift of historical and cultural continuity.

Note: On the CIP page, the publisher thanks Teresa Mlawer of Lectorum Publications “for her professional advice on this book.” I want to acknowledge Teresa, who left us in March of this year, for her great talent and gentleness and love of the culture. She helped shape many children’s stories and their translations, and her loss is deeply felt in the community. 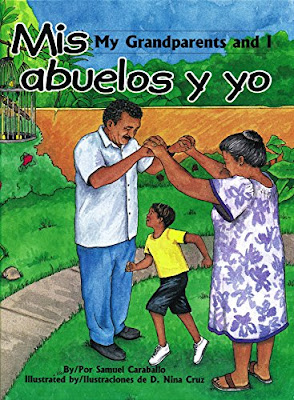 Caraballo is an outstanding poet who typically composes in Spanish, and then in English—so that each version reads smoothly and maintains its own integrity. Unfortunately, the translation here lacks this important connection to the author’s Spanish version. A warm story of a young child and his loving grandparents (in Spanish).