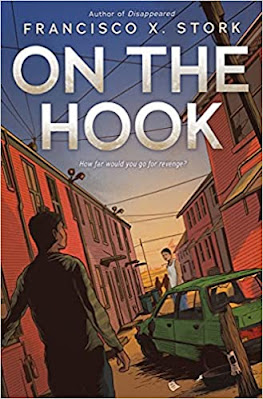 Francisco X. Stork is an acclaimed author of eight novels for young readers. His most recent novel, On the Hook, is a reimagining of his debut YA novel, Behind the Eyes, which was published in 2006. We’re fortunate to have this second-chance book out in the world.

On the Hook is full of ethical dilemmas with characters about whom we deeply care. Sixteen-year-old Hector Robles is a chess enthusiast, an honor student, and devoted to his family, aware of his responsibilities ever since the death of his father from cancer several years earlier. He and his classmate Azi, an immigrant from Iran, are becoming close, and he ponders what it means to have a girlfriend and to be a good boyfriend. He wants to stay out of trouble, but in the projects of El Paso, Texas, trouble seems to follow him in the form of drug dealer Chavo—whose  one-time girlfriend is now engaged to Hector’s older brothe—and Chavo’s drug-addicted younger brother Joey. At least Hector’s older brother has turned his life around and is planning to move the family out of the projects and to safety once he fixes up a house belonging to his boss.

In one violent night, Chavo and Joey wipe out Hector and his family’s future. Hector and Joey are on their way to a military-style therapeutic boys’ school together, with Hector single-mindedly plotting revenge against Joey. Here, things become interesting. Hector had won an award for an essay about “happiness,” focusing on his father’s journey from Mexico to the United States, his hard work, and his close family, but now he sees that Joey is the one who’s happy. Freed from his brother and his drug addiction, Joey is thriving in the rigidly-structured environment of the school. Does Hector now want to snatch that promise of happiness away, the way Joey snatched his happiness away months earlier? What are the consequences if he does? And how can Hector find happiness again?

Stork’s novels for young readers are deeply thought-provoking, and this one is no exception. His third-person voice conveys a respect for teen readers without preaching, and the principal characters are multi-dimensional—the heroes of their own stories. The theme of happiness runs through the book in unexpected ways, as we see that even someone like Joey deserves a better life than the one he has had so far.

On the Hook is a great book for teen reading circles. Today, the questions it explores go beyond the personal—stories of individuals and families—to society as a whole. We are at a point in our country’s history where hatreds have turned murderous, and reconciliation needs to happen at all levels of society. We all deserve happiness.

(Note: Lyn reviewed On the Hook simultaneously for De Colores and her blog, lynmillerlachmann.com.)