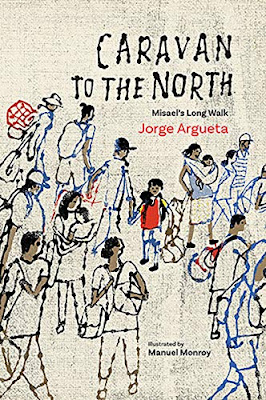 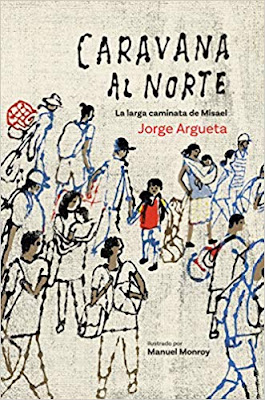 On the mostly black-and-white line illustration that wraps around the jacket, an anonymous group of people gathers in the Plaza Divino Salvador del Mundo. Most wear caps and lug drawstring sacks or backpacks or duffel bags or rolled-up sleeping bags, several carry toddlers or babies in slings, and one has a guitar. All of the people are brown and they face the same direction. Except for one man who is turned to the south, waving goodbye, all bodies and eyes are focused north.

In the group’s center is a young boy. With one hand, he holds a duffel bag and with the other, he grasps his father’s hand. While everyone else is depicted in white and is outlined in black or blue inks, this child wears a red t-shirt and his gaze is directed at the reader. He is the only one depicted with a mouth. His name is Misael Martínez, he is nine years old, he is part of the caravan to the north, and this is his story.

Through narrative verse in a voice that will resonate with young readers, Misael tells them why he and his family are leaving for the north.
As the families walk the 2,500 miles through Central America to the Tijuana border where they hope to cross into the US for a life that that will be safe and secure, Misael remembers his home—the good times and the beauty of simple things:
Readers also hear the voices of Misael’s parents. When they talk about the gang violence, their hearts are full of empathy for “those poor babies,” nobody’s children anymore but the gang’s. They talk about a neighbor’s son, killed by the cops.
Misael remembers the good things about their home, the beautiful things:
Each short chapter begins with a title and a black-and-white line illustration that sets the scene for the narrative that follows. For the interior illustrations, Monroy used a calligraphy pen and Chinese ink on rustic rice paper, and for the cover, he processed the illustrations digitally to add color. This technique works beautifully with the spacious book design, hinting at detail and leaving room for readers’ imaginations—encouraging them to pause, examine and reflect—and identify with young Misael, his relatives, and the other asylum seekers.

Through these simple line drawings and beautiful narrative poems that need no interpretation, young readers will see the impossible conditions, the violence that is continuing to drive thousands of refugees into the mouth of the shark. And they will also see the impossible beauty of the land that young Misael has left—and the warm arms of his relatives and the beauty of the countryside and the beauty of a kernel of corn sprouting up, breaking the soil and saying “hello.”

As they walk, the young refugees dream about what they’ll do when they reach the border. Misael fantasizes bathing in warm water and having a washing machine. Another boy wants to work and send money home to his mamá. Another’s ambition is to become a lawyer or a doctor, and yet another is happy to settle for just getting to the north.

On their long, difficult journey, the refugees are often met with kindness from strangers along the way. In Chiquimulilla, Guatemala,
And in Mexico City, a man at the shelter makes pupusas for everyone:
But when the large caravan finally reaches the US border they are confronted by the foreboding barbed wire-topped wall. Suddenly, cops and soldiers descend on them, attacking the families with tear gas and batons. The screaming, panicked, choking, people run every which way.

That night, as Misael falls into a fitful sleep, he dreams that he’s flying, that he’s a song, that he’s a butterfly, that he’s a fish and a wave. And then he dreams
Although both Caravana al Norte and Caravan to the North employ language as spoken by a child, they don’t talk down to child readers. Argueta wrote this story in Spanish, and Elizabeth Bell’s spot-on English translation maintains both the poetic rhythm and Misael’s deep feelings. Monroy’s simple, evocative drawings, combined with the desperate narrative of a frightened child, show young readers what it is to be confronted with the real terror of the Central American asylum seekers desperately attempting to get to El Norte.
*Highly recommended for home, library and classroom collections.

Argueta has a great talent and a gentle heart. Whether he’s writing in Nahuat, Spanish, or English, he knows his responsibility to the children of El Salvador and the children of the world—and he joyously takes it on. 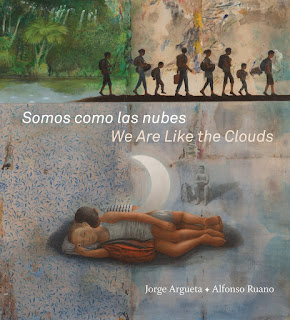 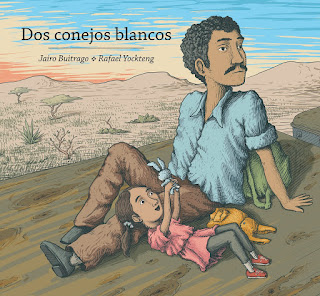