Enrique’s Journey: The True Story of a Boy Determined to Reunite with His Mother 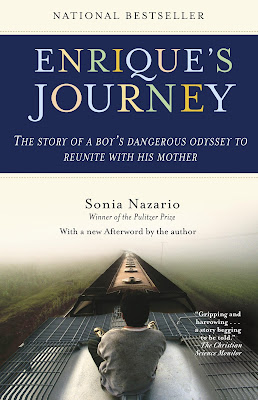 Journalist Sonia Nazario based Enrique’s Journey both on a series of articles in the Los Angeles Times for which she won two Pulitzer Prizes, and on an adult book of the same name, published in 2006.

When Nazario first met 16-year-old Enrique as he camped at Nuevo Laredo, the Mexican side of the Rio Grande just across from Laredo, Texas, he had traveled more than 1,600 dangerous miles—by train and bus, and on foot—from Tegucigalpa, Honduras, across the border of El Salvador, through Guatemala, to Nuevo Laredo. He had been caught, arrested and deported 17 times. Most children who begin this long and treacherous journey to the US are nabbed and sent back to Central America.

Enrique was five years of age when his mother had left him and his sister with relatives in Honduras. Her hope then was to escape the grinding poverty at home and get to the US, where she could earn enough money to send to her children and to return as soon as she could. But the last time Enrique saw his mother had been 11 years ago. Now, he missed his mother so badly that he was willing to risk his life to see her again.

Time and again, he had risked injury or death by jumping on and off of moving train cars; evaded murderous gangs, bandits, and border police; and braved both oxygen-sucking heat by day and bone-freezing cold by night. There was always sickness, hunger and thirst and, along with other secretive migrants, Enrique drank from muddy puddles and begged for food and rinsed his mouth with urine to prevent infection. This is Enrique’s harrowing story, which Nazario adapts for younger readers from her original book, and to which she appends an updated afterword, epilogue and additional notes about her research and writing process and what motivated her decision to get involved.

Gangsters who rule the tracks will kill the desperate migrants on a whim and bandits on the trains will take what little they have. Girls cake themselves with dirt and rip their clothes, trying to make themselves “ugly” in order to avoid rape. The young people band together when they can, avoiding snakes and robbers, and sleep wherever they can, including in sewage ditches and in graveyards, behind churches. Sometimes they sniff glue to take away the pain of cold and hunger. They eat whatever they can find or beg, and drink wherever they can find water:

Once, riding on top of a moving train, (Enrique) grew so hungry that he jumped forward to the first car, leapt off onto the ground, and raced to pick a pineapple. He was able to reboard one of the train’s last cars. Another time, he had gone two days without water. His throat felt as if it was swelling shut. There were no houses in sight. He found a small water trough for cattle. It was frothy with cow spit. Under the froth was green algae. Beneath the algae was stagnant yellow water. He brought handfuls to his parched lips. He was so thirsty that it tasted wonderful.

The migrants also encounter acts of generosity from people who can least afford them. In Veracruz, they meet families who live in humble houses on the edge of the railroad tracks, families of whom, as Nazario writes, “30 percent of children five years and younger eat so little that their growth is stunted,” who risk their own lives running alongside the trains, thrusting up bundles of food and clothing, plastic jugs of water—and prayers. In Nuevo Laredo, they meet Padre Leo, who brings in a doctor and a haircutter and, despite the danger of being charged with human smuggling, gives up his small apartment so that girls and women can have a safe place to rest. And, no matter what it takes, he and his volunteers make sure that the desperate migrants have a meal.

The thousands of migrants, Nazario writes, hop as many as 30 trains to get through Mexico, and many stop to work subsistence jobs along the way. For some, the trips take about four months; for others, about a year. Most of them are caught and try again.

On March 24, 2000, a field hand in Las Anonas encounters a bleeding and battered boy, naked except for his underwear, “stumbling first one way, then another.” He had been beaten and robbed.

His right shin is gashed. His upper lip is split. The left side of his face is swollen. His eyes are red, filled with blood. He is crying. He dabs at open wounds on his face with a filthy sweater he has found along the tracks.

Enrique whispers, “Give me water. Please.” In town:

[T]he mayor’s mother cleans Enrique’s wounds with water, salt, and herbs. She brings Enrique a bowl of hot broth, filled with bits of meat and potatoes. He spoons it into his mouth, careful not to touch his broken teeth. He cannot chew.

Figuring that it would cost three times more to bury him than to save him, the mayor of nearby San Pedro Tapanatepec makes sure he gets medical care.

Enrique represents millions of people who have come through, and his story does not have the ending that middle readers might hope for.

As a journalist, Nazario has professional boundaries: her reporting is pretty much limited to a presentation of the facts. She can’t tell the reader what she thinks of the gangsters or the rapists or the human smugglers (“coyotes”) who often leave their impoverished migrant or refugee “clients”—including children—to fend for themselves. On the other hand, while it may be more difficult for teen readers to understand the interiority of the main characters—their feelings and reactions to the horrible conditions they face—the value of well-written journalism is that it allows a greater, more rounded perspective than does fiction.

If Enrique’s Journey had been an “as-told-to” or based entirely on Enrique’s story, readers wouldn’t have the journalistic perspective that allows a comparison of migration today with migration 20 years ago. Nazario takes the story beyond the lives of Enrique and his mom, and in doing so, she creates a distance between the reader and Enrique. This is a trade-off, but one that shows the value of nonfiction in general and journalism in particular. While it lacks the intimacy of a first-person narrative, Enrique’s Journey provides a hair-raising, but not sensationalized, story of what really happens and is still happening. Indeed, Enrique’s story is intense; it places young adult readers into a picture that’s generally seen only in headlines or sanitized stories. It also serves as a model for young readers considering a career in journalism. Enrique’s Journey:  The True Story of a Boy Determined to Reunite with His Mother (which is also available in Spanish as La travesía de Enrique: La arriesgada odisea de un niño en busca de su madre, not reviewed here) is highly recommended.

(Note: In a 2006 interview with Publisher’s Weekly, Nazario said that she recognizes that the influx of “such a powerful stream [of undocumented immigrants] will only change if it is addressed at its source, if the economies of these countries that are sending large numbers of people to the United States improve.” While she eloquently writes about some of the devastating results of this forced mass migration on individual migrants and their families, I would like to have seen an acknowledgement of their source: the US neoliberal / corporate “free trade” policies such as NAFTA that so deplete resources throughout Latin America as to impoverish millions of people, who are then forced to flee, as a colleague said, “into the mouth of the shark.” I strongly encourage educators to supplement Enrique’s Journey with well-written historic and contemporary materials about the economic and sociopolitical realities of the mass migrations of desperate people—including unaccompanied children—to el Norte.)