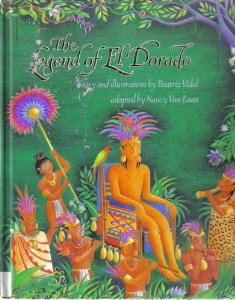 In an introductory note, Vidal writes that, as a child in Argentina, she first heard the stories about El Dorado from her father; and much later, she came across the “original source,” which inspired her to paint this “rich and fascinating treasure.” Vidal showed her version to her colleague, Van Laan, who “had the right poetic voice,” and the two decided to collaborate on something that would appeal to young readers “without losing the romantic, tragic flavor of the tale.”

There are many, many variations of the El Dorado story. Some contain a cacique, who covered his body with gold dust each day before jumping into the lake to bathe. Some involve the lake itself, into which gold would be thrown in political or spiritual ceremonies. Some contain a description of the city as a vast kingdom where gold was so plentiful that it was used to construct whole houses. Some involve women and children being thrown into the lake, either as sacrifices or as punishment. Some involve a cacique’s wife who throws herself into the lake to escape a horrible punishment for her sins, and survives there as a deity. And other variations are so violent and gory as to compete with a Mexican telenovela gone rogue.

In Vidal and Van Laan’s version, the wife and daughter of a wealthy Chibcha “king,” lured by the dazzling sight of a ruby-eyed emerald serpent, disappear into the waters of Lake Guatavita. The high priest speaks to the serpent, who assures him that the “queen” and “princess” are safe and happy and will be reunited with the king, but only if he rules wisely. So each year, he covers himself with gold dust (thereby becoming known as “El Dorado”) and throws his treasures and himself into the lake to remind the serpent of its promise. One year he doesn’t reappear—the serpent has kept its promise: the king is reunited with his lost family.

Vidal’s mixed-media art—lush tropical scenes in bejeweled tones of mostly blues, greens, and reds—are reminiscent of Paul Gauguin’s post-impressionist work. The Indian subjects are mystical and primitive, and perfectly complement the text, which focuses, not on the people as fully developed humans, but as mystical and primitive. There’s lots of gold throughout. The title on the cover shines. The endpapers depict tropical birds flitting around golden beads. There’s gold dust on the king’s body, on the earthen ground, and in and at the bottom of the lake.

Before the conquistadores got to them, there were some 500,000 Chibcha people[1], who lived in the high valleys around what are now Bogotá and Tunja, Colombia. They were centralized politically and their economy was based mostly on intensive agriculture and considerable trade, which provided the gold used for ornaments and offerings. In the 16th Century, the Spanish invasions crushed the Chibcha political structure, and in the next 200 years, the language was all but obliterated as well.[2]

What have been mislabeled as Indigenous “myths” or “legends” are cultural histories and teachings, passed down from generation to generation. Since the Chibcha political and economic systems were never based on gold, the “legend of El Dorado” is not, and never was, a Chibcha legend.

A brief digression about the history of the “legend of El Dorado”:

In the early part of the 16th Century, fantastic stories circulated throughout Europe about a city of immense wealth somewhere in the Americas, a place of untold riches, a place that contained so much gold that it later became known as “El Dorado.” In this city, it was said, the people adorned themselves, head to toe, with gold; they even painted themselves and the trees and the rocks with gold! Heavily financed and heavily armed by the royals and other wealthy families, the explorers and conquistadores raced to the Western Hemisphere to find, conquer, and occupy El Dorado and the people who lived there.

But wherever they went, the locals pointed this way and that way—anywhere but where they were. And everywhere the conquistadores landed, the story became more and more embellished. Now there was a tribe—somewhere else—high up in the Andes Mountains—that way—where the cacique painted himself with gold dust each day before jumping into the lake to bathe! Or down there in the impenetrable jungles, where the people threw gold and precious jewels into the water to appease the spirits! Or over there, in the barren deserts, where could be found gold nuggets as large as suckling pigs! Indeed, the Spaniards, who wanted so much to believe that they were soon to encounter El Dorado, began to call the cacique of this unknown tribe El Dorado.

After Cortés sacked the great Mexica Empire in 1519 and Pizarro, the Inca Empire in 1532-33, the conquistadores found some gold—but not very much—among the Indigenous peoples living along the coast of South America. In the years that followed, the conquistadores rampaged up and down the coast, plundering Indigenous towns and villages and slaughtering hundreds of  thousands, if not millions, of people. But, of course, no one ever did find El Dorado—because it existed only in the searchers’ fevered, gold-crazed imaginations.

One of the things that survived these atrocities was a story published in the journal of Sebastián de Benalcázar, a chief lieutenant of Pizarro’s and a ruthless conquistador who claimed that an “Indian” had told him about El Dorado. (This is the account that Vidal names as the “original source” of her story.) But two other scenarios are totally possible and more likely: one, that the anonymous Indian was one of many who made up these stories to deflect the Spanish (and let’s not forget the British and German) forces away from their own communities; or, two, that de Benalcázar invented the story in order to bankroll new projects, justify new incursions, and recruit new soldiers.

So Van Laan’s version is her adaptation of Vidal’s father’s adaptation combined with the adaptation of a mass murderer who undoubtedly embellished the story (if he didn’t actually write it himself). And from all this we get: A picture book for children.

The major reviewers loved The Legend of El Dorado: Booklist praised it as “a splendid addition to folklore shelves and useful for showing the richness of Indian culture prior to the arrival of European explorers.” Kirkus suggested that it was “just right for giving added dimension to a unit on explorers.” And Publishers Weekly called it a “splendid pairing of Van Laan’s suave retelling and Vidal’s richly colored illustrations—meticulously executed and imbued with primitive charm—capture all the beauty and mysticism of a culture from long ago and far away.”

What’s wrong with crafting a picture book out of a legend—that never existed—about a fabulously wealthy tribe in South America—that never existed? And leaving out the fact that versions of this legend were spread around Europe as a rationale for greed and genocide? Indeed, Vidal and Van Laan’s The Legend of El Dorado, as a picture book, is dishonest: It promotes a worldview that justifies rapacious colonialism, Manifest Destiny, economic determinism and neo-liberalism.

When The Legend of El Dorado was being created, written, illustrated, and finally published, Vidal and Van Laan (and/or the editors and publisher) either didn’t know about the awful repercussions of this fake “legend,” didn’t want to know about them, or didn’t think they were important. Or did know and didn’t care.

In fact, the whole concept of teaching children about “myths” like these is that, absent any cultural and/or historical contexts in which they were created, they portray Indigenous peoples as ignorant, superstitious, materialistic, and therefore deserving of conquest. Or being wiped out entirely. It’s a setup. Now, more than ever, we have to be responsible enough to be truthful, to talk about history, not gloss over appalling things like genocide.

There is no excuse for this; not even when it’s couched in ridiculous, incomprehensible, New Age romanticism that neither children nor teachers will understand:

“As bits and pieces of the treasure are recovered,” Vidal writes, “the real El Dorado begins to unfold, the one that has lain dormant, waiting to be discovered, not by conquerors but by true seekers. For El Dorado is much more than the physical and glittering gold: it is that Inner City of the spirit, which one needs the utmost purity of heart to enter.”