How Many Days to America? A Thanksgiving Story 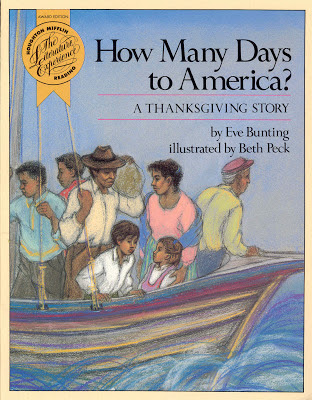 How Many Days to America? A Thanksgiving Story tells the wrenching tale of a family forced to leave an unnamed Latin American country, where they are fleeing from political oppression. They board a fishing boat to travel to the US. Their journey is arduous—the motor breaks, the soldiers in their country shoot at them from the shore, their food and water run out, people become ill, and thieves take what little they have left. When they finally arrive at the US mainland, soldiers give them food and water but do not let them land. “They will not take us,” the father comments sadly, but he doesn’t say why.

Yet inexplicably, the next day, the boat lands at the US shore again. This time there are no soldiers, but instead a large crowd of people who welcome the family and usher them into a shed in which there are tables covered with delicious food. They explain that it is “Thanksgiving” and tell the new arrivals about the significance of that day in the US. How Many Days ends with a description of how “[f]ather gave thanks that we were free, and safe—and here.” The little sister asks if they can stay. “Yes, small one,” the father replies. “We can stay.”

Peck’s pastel drawings, on a subdued, depressing palette of mostly browns, blues and some yellows, portray the characters as real human beings. They have real expressions; they are real people with whom children can relate. The tone of the illustrations is as somber as the story, and then—voila!—the people are all sitting together at a table laden with delicious food, and the whole scene is brighter, lighter, and more hopeful. Teachers may be drawn to the illustrations as well, and those who find stories about “The First Thanksgiving” problematic might unwittingly see this book as a great Thanksgiving read-aloud that encompasses both multicultural and social justice themes. They would be wrong.

One of the most frustrating things about How Many Days is that Bunting doesn’t specify where the characters are from, why they have to leave their homes, or why they are being shot at. Rather, she serves up a generic version of a politically oppressive tropical nation, feeding into US stereotypes of Latin America as a backwards place full of palm trees and dictators. Many factors indicate that the unnamed country is probably Cuba—for example, the fact that the refugees can travel by boat to the US and that they are presumably safe from immigration authorities once they land. However, by refusing to name the place—by portraying the characters absent any cultural, linguistic or historical specificity—Bunting avoids real conversation about politics or the realities facing Cuba and her people.

How Many Days sets up a false expectation: No matter the struggle that it takes to get to the US, once here, you are safe and you are allowed to stay. Yet this is clearly not the case for many migrants and immigrants who have no documents. Indeed, many children recognize that, despite their families’ arduous journeys to this country, they still face the dangers of deportation, exploitation, and discrimination. Just as Bunting stays silent on the reasons why the soldiers initially refuse to allow the family to land, she all too swiftly conjures up a happy ending. In How Many Day to America? A Thanksgiving Story, Bunting simplifies and objectifies immigrants’ struggles and ignores the possibility that citizenship might not be easily attainable for all who set foot on US shores. NOT Recommended.