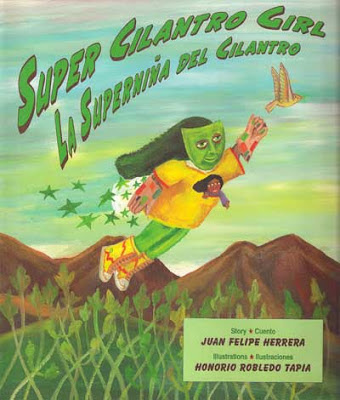 Super Cilantro Girl  La superniña de cilantro tells the story of Esmeralda, a child whose mother, despite the fact that she is a US citizen, is stopped at the US-Mexico border. Worried about her mother, Esmeralda dreams that she turns green like a bunch of cilantro, grows into a giant, and flies to the border to set her mother free. Here Herrera paints a vivid picture: “She gawks at the great gray walls of wire and steel between the United States and Mexico. She stares at the great gray building that keeps people in who want to move on.”
In her dream, Esmeralda rescues her mother. When the soldiers begin chasing her, she makes green vines and bushes of cilantro grow up and erase that border, declaring that the world should be sin fronteras—borderless. However, when Esmeralda wakes up, she discovers that she had been dreaming and that her mother is safely back home.

Robledo Tapia’s acrylic illustrations, on a bright palette of mostly cilantro greens with browns, blues and yellows, are rendered in a comic-book style that children may find appealing. Unfortunately, his characters’ faces—skeletal, with bugged-out eyes and weird grimaces—are unnerving and almost grotesque, an awkward distraction from the story.

Herrera’s Spanish version reads at least as well as the English, to the extent that it’s hard for me to figure out which he wrote first. One doesn’t seem like an obvious translation of the other; rather, there are small differences in the text that show an appreciation for the subtleties of each language.
Super Cilantro Girl hints at the terror that children experience at the prospect of their families’ being split apart, but it does not put the characters in any real danger. Esmeralda’s mother is a citizen and, therefore, does not risk being separated from her family. In the foreword, Herrera expresses concern about families kept apart by borders and shares his wish that some superhero could abolish such borders and bring those families back together. However, making Esmeralda’s mother a citizen in no danger of actually being barred from returning home sends the message that family separation, deportation, and detention centers are all part of a dream from which you can wake up. These real dangers exist only in the lives of others.

As long as this book is accompanied by thoughtful discussion about the harsh realities of immigration, Super Cilantro Girl / La superniña del cilantro is recommended.