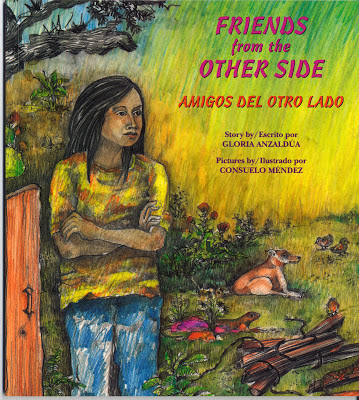 In Friends from the Other Side / Amigos del otro lado, Prietita, a young Chicana, meets Joaquin, a boy who, with his mother, has crossed the border from Mexico without documents and is living in poverty on the outskirts of town. After defending Joaquin from a group of local boys who call him a “mojado” and try to throw stones at him, Prietita befriends him. When immigration agents come looking for people without documents, she helps Joaquin and his mother hide in the house of the local curandera, who later teaches her how to use herbs to help heal the sores on Joaquin’s arm.

Friends from the Other Side stands out among picture books dealing with immigration as a frank portrayal of the difficult lives of undocumented people on this side of the border. Far from the rosy picture of life in the US painted by many children’s books about immigrant lives, Joaquin and his mother are portrayed as living in poverty, facing discrimination from community members, and constantly wary of immigration raids. Also present is the tension and horizontal violence that can occur between Mexican and Mexican-American people in the US. For example, the neighborhood boys who are Mexican American, tell Joaquin, “We don’t want any more mojados here.” When immigration agents arrive in the neighborhood, the Chicano agent laughs and jokes with the Mexican-American residents. These complex dynamics are well done.

Méndez’ colored pencil-and-graphite illustrations, on a subdued palette of mostly browns and greens, genuinely evoke the lands of the southwest. Yet, the people’s faces are strange looking and the asymmetrical proportions change on every page. Both Prietita’s and Joaquin’s noses, for instance, are sometimes small and sometimes bizarrely large. This constant distortion makes it difficult to connect with the characters.

The language is stilted in both Spanish and English. The dialogue is unnatural; Prietita and Joaquin don’t sound like children. In some places, the English reads as significantly less natural than the Spanish. For example, the Chicano immigration agent asks in English, “Does anyone know of any illegals living in the area?” Yet in Spanish he asks, more colloquially, “¿Saben ustedes dónde se esconden los mojados?”

In the English version where Joaquin’s mother offers Prietita food, there is this: “She...knew that they would offer a guest the last of their food and go hungry rather than appear bad-mannered.” Here, the emphasis is on “appearance” rather than generosity. The Spanish version, on the other hand, reads: “[S]upo que compartirían su poca comida aunque después pasarán hambre.” This suggests that a certain degree of cultural awareness has been lost in translation.

The biggest problem with Friends from the Other Side is that, while it appears to portray undocumented immigrants sympathetically, it ultimately patronizes them. From the beginning, Joaquin and his mother seem like helpless victims. Even the way that Joaquin is drawn shows him as skinny, sick, and awkward. He cannot stand up for himself with the neighborhood boys. The only agency that he and his mother seem to have is offering food to Prietita when they are clearly too poor to put food on their own table. Prietita refuses, but notes the “pride in their faces.” This whole dynamic plays into the common stereotype about the nobility of poverty and essentializes the characters.

The real focus here is not on Joaquin and his mother, but on Prietita. She saves the day again and again, defending Joaquin from the neighborhood boys, deliberately befriending him, giving him food in a way that doesn’t damage his “pride,” hiding him and his mother from immigration, and finally curing his sores. Joaquin and his mother are essentially voiceless and lacking in agency. In the end, the curandera decides to teach Prietita how to make the paste to heal Joaquin’s arms. It’s awkward that, although Joaquin is right there, there’s no implication that he could also learn to heal himself. In truth, the message is one of charity rather than empowerment or solidarity.

While I have great respect for Gloria Anzaldúa as an intellectual and an author, and while I think that very critically conscious teachers and parents could possibly use this book to good effect, I can’t recommend it.