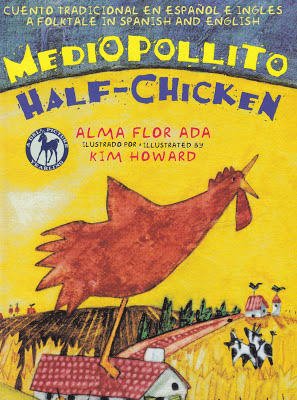 On the double-page frontispiece, a Mexican mother and her son are sitting at a fountain, their shoes off, relaxing. The mother is gesturing as she begins to tell her son a story, and the little boy is taking it all in. In the background are rolling hills, a road, and several small houses and buildings—every one of them sporting a weather vane.

Mediopollito is the story of a little chicken who’s born with one wing, one leg, one eye, half a beak, half a body and half a head. Mediopollito—“Half-Chicken”—is a vain, haughty little guy who looks down on everyone around him. One day, over his mother’s objections, he hops off, on one foot, to see the world.

In the old story, Mediopollito is an unlikeable, nasty little creature. He ignores his mother, he’s rude to everyone he meets, he picks fights with the other animals, and he’s really, really mean. On his trip to visit the king, the haughty chicken refuses to help those in need—water, fire, and wind. When he arrives at the palace, the royal cook tosses him into the pot for the king’s dinner. Here, Mediopollito gets his comeuppance from water, fire, and finally wind, who blows him up to the top of a church, where he becomes a weather vane, never to hurt anyone else’s feelings again.

In Alma Flor Ada’s kinder, gentler version, Mediopollito is vain, but not totally nasty. On his journey, when he encounters someone in trouble, he decides to lend a foot. So when he gets to the palace and the royal cook dumps him into the pot to boil him for the viceroy’s dinner, those he helped—water, fire and wind—return the favor and save his skin—literally. Wind blows him up to one of the towers of the palace, where he is able to see everything he wants, “with no danger of ending up in the cooking pot.”

Several other versions I’ve read are so cloyingly lesson-heavy that they’ve had me gnashing my teeth. But Alma Flor Ada’s story is none of this. Rather, Mediopollito is a well-told tale that works well with youngsters and adults who appreciate the style of a good storyteller.

With Spanish text on the left side and English on the right of each double-page spread, Kim Howard’s lush mixed-media art is rendered in festive colors, complementing both languages and lending continuity to the story. Rosalma Zubizarreta’s excellent Spanish translation has its own rhythm and cadence, so hablantes and English-speakers can follow along in their own language—or in both. Mediopollito is highly recommended.