Lola Levine and the Ballet Scheme 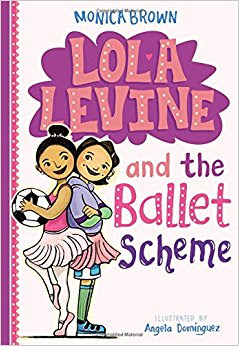 As we all know by now, our young protagonist is a super-smart, super-outspoken, and super-opinionated second-grade goalie who won’t back down, no matter what. And she speaks without filters, telling everyone within earshot what she’s thinking at the speed that she’s thinking it. Here, for instance, is Lola’s breathless first encounter with her new classmate, Isabella Benítez, who is decked out in pink, which, of course, Lola just cannot abide:


“I’m Lola…. Lola is short for Dolores. My mom is from Peru—is yours, too? Do you speak Spanish? I do. My dad is from here. He’s Jewish. My mom’s Catholic. I’m both. Do you play soccer? I do. Are those bedroom slippers on your sweatshirt? Do you always wear pink? Don’t you get tired of it? It isn’t a very interesting color, in my opinion—”

Isabella (or, as she prefers, “Bella”) is a student of ballet, a girl who is happiest dressed in pink all the time—this day she wears pink hair ribbons, a pink sweatshirt, a fluffy pink skirt, and even pink tennis shoes. And she’s not about to allow Lola’s attitude to go unchallenged: “Actually,” she says, “pink is a very interesting color. It’s the color of bubble gum and cotton candy and bunny eyes and—”

When an accident occurs—involving an explosion of black dye that ruins everyone’s clothing—the moms get involved and, with Principal Blot’s blessing, the two girls are forced to switch roles: while Bella engages in soccer drills (in which she excels), Lola puts on “weird clothes” and attends ballet practice (in which she is definitely “not horrible”).

And meanwhile, Lola’s kindergartner brother, Ben, starts to experiment with what he has been led to think is only a “girl” thing:

Bella and I take a look, and that’s when I see Ben. He’s leaping, spinning, and dancing around the lobby. He must have been watching the ballet class very closely through the window, because he seems almost good at it.

When the ballet coach remarks to mom about Ben’s natural talent, both plant the seed and give Ben space and time to think about becoming a ballet dancer. “OK,” he says.

Meanwhile, Lola’s Peruvian mom and Bella’s Mexican mom are becoming fast friends, as are Lola and Bella. And, when Lola discovers how her own quick thinking and a ballet move can destroy the opposing team’s attempt at a goal, well, that’s it. The moms’ ballet scheme has worked and the two girls find, as Lola muses, “just because we’re friends doesn’t mean we have to do everything the same, right?”

Dominguez’s grayscale interior illustrations, begun with loose pencil sketches and digitally finalized, beautifully maintain the ethnic similarities and differences within Lola’s own family and among her friends, teachers, and schoolmates.

But her cover art—just wow! Rendered in pencil with tissue paper on illustration board and finished with digital color, here are Lola and Bella, standing back-to-back, facing the reader and slightly turned toward each other, smiling widely. Bella is wearing a pink ballerina outfit and holding a soccer ball, while Lola is wearing a pink tutu over her soccer uniform. Here are two Latina children—one Peruvian and one Mexican. They have different skin tones and different facial features and are not, in any way, caricatured. How rare and real and beautiful and affirming is that?

Lola Levine and the Ballet Scheme is an easy-to-read, smart, funny and affirming story that challenges socially established gender roles in an age-specific way that will especially resonate with young readers who feel—or actually are—marginalized by these norms. It’s not only a typically fast-paced “Lola” story but an important one as well. It’s highly recommended. 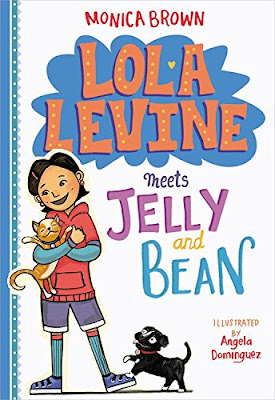 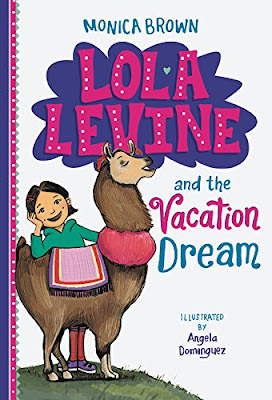