Stella Díaz Has Something to Say 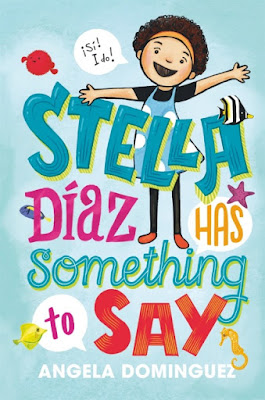 Third-grader Estrella (Stella) Díaz has a lot of things to say, especially when she’s talking about her interests, which revolve around marine life. As an emerging bilingual child, she sometimes uses Spanish pronunciation for English words or phrases—or, at times, substitutes similar-sounding words. Stella often gets frustrated, and her feelings of inferiority are compounded each time Jessica, the “mean girl,” makes fun of her. And when she has to read aloud, Stella’s stomach gets tied up in knots and she can barely talk at all.

Once a week, Stella takes “speech” lessons, where she is rebuked for using a Spanish word and is taught “to speak properly. This means how all the letters and words are supposed to sound in English,” she tells the reader. “At least that’s what my speech teacher, Ms. Thompson, says.”

By emphasizing “properly” here, Stella silently calls out her speech teacher’s loaded judgment. Although Ms. Thompson’s insistence may seem like a small thing, this kind of teaching squelches the self-image and creativity of children who are dual-language learners.

And when Stella discovers her status as a “legal alien,” she pictures “all these spiny, crawly, deadly aliens, the ones people run away from,” which, of course, makes her feel even more that she doesn’t belong. “I wouldn’t be an alien if I were living in Mexico,” she thinks, “I’d be natural there.” If she becomes a citizen, she asks herself, will she finally feel normal?

Born in Mexico City and raised in Chicago, Stella lives with her awesome mom, an executive at a radio station and dynamite cook besides, who speaks Spanglish at home; and her older brother, funny, good-natured, middle-schooler Nick. Evenings after dinner, the three play card games and sometimes dance to salsa music, which is “different from chips and salsa,” Stella explains. Her parents are divorced, and Stella says that her dad, who lives in Colorado, doesn’t know how to be a dad: he doesn’t keep promises, he’s never around, and he doesn’t send money.

Stella has a best friend, Jenny, who is Vietnamese American. They like each other, in no small part because, as cultural “outsiders,” they have much to share. In some ways, Jenny, who is bolder than Stella, is her alter-ego; and Stella sometimes imagines—after a particularly embarrassing time being harassed by mean-girl Jessica—going back in a Fantastic Time Machine and telling Jessica off or having Jenny talk for her.

As Stella navigates third grade—culturally and emotionally supported by her mom and extended family; encouraged in developing her artistic talent by her innovative classroom teacher, and acknowledged by the school librarian, who greets her in Spanish—she succeeds in making friends and becomes “professional” at ignoring bullies, creates her first book and a poster for the third grade spelling bee, and makes it to the semifinals. And, in a costume she’s created and standing in front of her handmade submarine, Stella introduces herself as Jacques Cousteau and makes an amazing class presentation on sea life.

At the end of the day, Stella says:

I grab my cheeks because my face hurts from smiling so much. I just can’t stop! Not only did I speak out loud in front of the whole class, I did it well. Today, I really lived up to my name. I really was an Estrella.

This warm story of family and community encompasses a variety of cultural markers as well as mostly contextualized Spanish words and phrases. It would have been good, though, had Domínguez chosen not to italicize the Spanish. This style should be used only for emphasis.

Domínguez’s appealing ink-and-pencil, mostly spot illustrations (and several full-page illustrations as well) provide visual context for youngsters moving from picture book to chapter book, and young readers might also recognize some of them from her previous picture books. In one particularly moving illustration, Stella lies down on her living room rug. Her limbs are spread out and she’s sadly staring into space. She’s emotionally exhausted after yet another day of defending herself from the school bullies.

Domínguez inserts herself into the story as a children’s book author in a library performance, in which she reads a book she’s written in Spanish and English, and talks about how she dealt with her own language-acquisition challenges—“She read even more and made herself write all the time. Then she decided that’s what she wanted to do when she grew up.” Stella is beyond impressed. “Don’t tell anyone,” she tells her beta fish, Pancho, “but I might want to be an author one day.”

In an Author’s Note that maintains her story’s narrative voice, Domínguez discloses to young readers which parts of Stella Díaz Has Something to Say are based on her own childhood. And she advises them: “Never forget that you’re so much stronger than you realize. You’ll be surprised by what you can accomplish.”

Young readers—especially immigrant children, and those who are struggling with challenges involving language acquisition and fluency and the frustrations of being misunderstood—will easily relate to our young protagonist. So will everyone else. Stella Díaz Has Something to Say is *highly recommended for all home, classroom and library collections.


Addendum / Update: On page 119 of the ARC (proofreader copy), Stella says, “I can feel my heart beating like war drums in my chest.” To many readers, this may seem like an innocuous comment, but to many others, it’s a hurtful stereotype of Native peoples. I want to thank Angela Domínguez and her editing and publishing team for offering to change this line in the second printing and paperback editions of this book. The change will read, “I can feel my heart pounding like drums in my chest.” It’s a quick and easy, but very important, fix.

I Speak English for My Mom 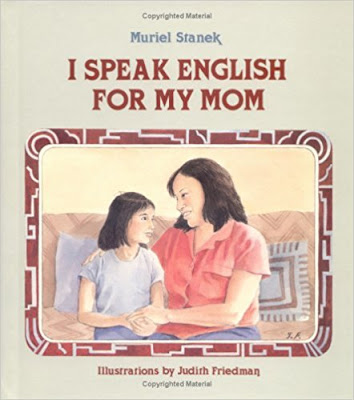 “When I was small,” young Lupe Gómez says, “Mom helped me do everything. Now that I’m older, I have to help my mom because I can speak English, and she can’t.” At school, Lupe speaks English. At home, she speaks Spanish with her mom. And outside the home, sometimes she speaks for her mom.

Unlike many picture books about immigration, I Speak English for My Mom is anything but a deficit model of an immigrant family. Before Lupe’s papa died, her mom promised him that she and her young daughter would come to the US where opportunities would be better for them. Lupe has heard this story many times: She and her mom will work hard and she will go to college and get a good job when she grows up.

Although they have to scrape by economically, Mom is far from helpless. She’s raising her daughter in a mixed community where the adults speak Spanish with each other and their bilingual kids code-switch, she works full-time in a garment factory where everyone speaks Spanish, she shops mostly at the local frutería, and cashes her paycheck at the currency exchange next to the factory. Usually, the only times she enlists her daughter to speak for her are at the pharmacy, at the clinic, and at parent-teacher conferences.

Although Lupe’s narration is in English, young readers will easily recognize what is being said in which language. For instance,

When Mom takes me to the clinic for my checkup, the doctor speaks English. I tell Mom what he says. Once I played a trick on her. “What did the doctor say?” Mom asked. “He said I should eat lots of candy and ice cream.” Mom laughed. She knew I was fooling her.

As do many youngsters with this kind of responsibility, Lupe sometimes feels put-upon; when her mom needs her, however, she’s there. But when the factory where mom works cuts everyone’s pay because “business is not good,” Mom realizes that she needs to look for better prospects. And she knows she will have to learn English to work downtown. After some amount of worry, Mom and her friend, Mrs. Cruz, decide to enroll together in free English classes offered at the local high school.

Unlike Home at Last (http://decoloresreviews.blogspot.com/2017/10/home-at-last.html), where every Spanish phrase is repeated in English as from a textbook and Mamá’s inability to speak English throws her into an existential crisis, the narration in I Speak English for My Mom is seamless and organic, as are the conversations between Mom and Lupe. When Lupe helps Mom practice her English homework, for instance, the language is simple and stilted, and when they speak Spanish again, the flow is natural:

Then we go back to speaking Spanish.
“It takes me a long time to learn a new language,” Mom says.
“But one day you won’t have to speak for me anymore.”
“I think maybe I will miss it,” I tell her.

Friedman’s detailed pencil drawings are emotionally honest, warm and inviting. Most of them depict mother and daughter together—at the pharmacy, at the clinic, at school, and in the kitchen, counting Mom’s meager earnings. And on the cover, rendered in watercolors on a subdued palette, mother and daughter sit on a couch together, holding hands and smiling at each other. What’s not generally illustrated in picture books with this kind of theme is here: older and newer houses on a tree-lined street, a tiled kitchen with a potted plant, patterned wallpaper, curtains on the window, and a vase of flowers on the dresser next to a family photo of mamá, papá, and baby Lupe in Mexico.

On the last page, there is this:

Mom tucks me into bed.
“Buenas noches,” I say to her.
“Good night,” says Mom.

I Speak English for My Mom tells of a warm and loving relationship between a mother and her daughter, living and working in a mixed community in which everyone knows each other. It’s an older book, but still a refreshing addition to a body of literature that portrays the important roles that children in immigrant families—and particularly, in Raza families—assume.