Beneath the Stone: A Mexican Zapotec Tale 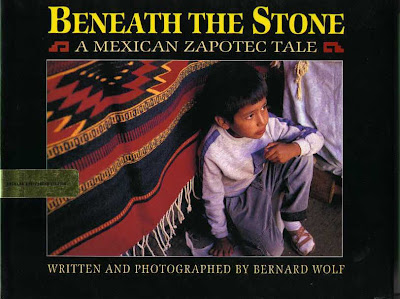 Wolf’s photographs here are absolutely wonderful. I know these people. There is a real feeling of the family, at home, at work, and in the marketplaces of Oaxaca.

A few things particularly bother me, however. When Leo and his father have kept poverty at bay by selling their tapetes—I do this myself at the local flea market—they visit Monte Albán, the Zapotec city that was a thriving metropolis and trading center about 2,500 years ago. His father tells Leo “that the Zapotecs leveled the entire top of this mountain to build this city. How did they do that? he wonders. No one knows.” This disbelief comes more from the author than from Leo’s father, who would have known that the Zapotecs had sophisticated technology and were incredibly talented builders. And Wolf states that from the mountaintop of Teotitlán, “It is believed that, either by signal fire or reflected light, the ancestors ‘spoke’ to the Place Beneath the Stone.” Here, Wolf’s use of quotation marks around the word “spoke” tells the child reader, “but it really wasn’t so,” which trivializes the complex belief system of a people.

In the marketplace, the reader is treated to photos of all kinds of delicious food, and then we see that even “fried grasshoppers!” are sold here. It is a fact that insects are eaten all over the world; they are an important and cheap source of protein. But here, Wolf’s use of an exclamation point signals otherness, weirdness to young readers, who will invariably think that it is “yucky” for people to eat grasshoppers.

Finally, Wolf’s section on Zapotec history is fairly accurate until the end, where he says that life for Mexico’s “diverse Indian cultures has vastly improved. In spite of lingering racial prejudice, these people are treated with some respect now. Most importantly, they are left to pursue their own life-styles and traditions.” The Zapatista Revolution in Chiapas belies this; one need only read the newspaper to see that Indigenous rights have been negated for many years and are being fought for on a daily and continuous basis. Not recommended.