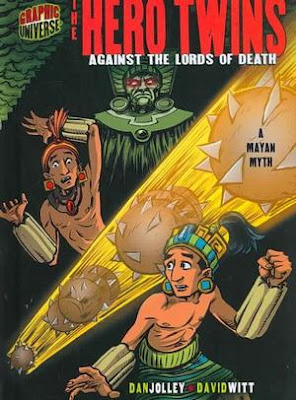 From the back cover:

Can two young boys outsmart and outwit the lords of death? The Hero Twins, Hunahpu and Xbalanque, were blessed by the Mayan gods with special powers. But their incredible skill at playing Pok-ta-Pok, the Mayan ball game, angers the lords of Xibalba, rulers of the land of the dead. When the lords challenge them to a Pok-ta-Pok game in Xibalba, the twins know they must use all of their powers and cunning to defeat the lords' many challenges. Will they survive the land of the dead?

“Stories are not just entertainment,” Lenore Keeshig-Tobias once wrote.[1] “Stories are power. They reflect the deepest, the most intimate perceptions, relationships and attitudes of a people. Stories show how a people, a culture thinks. Such wonderful offerings are seldom reproduced by outsiders.”

In the invention of The Hero Twins Against the Lords of Death: A Mayan Myth, Keeshig-Tobias is proven right. Here, Jolley and Witt have collapsed part of the sacred text of an incredibly beautiful and complex oral saga into a graphic novel—and based their version on culturally distanced sources, including a “Meso American folklore expert.” A parallel reading of Montejo’s adaptation of the Popol Vuh [2] and Jolley and Witt’s Hero Twins reveals major problems with the latter:

• In the Popol Vuh, Junajpu and Ixb’alanke are the “Amazing Twins.” From the beginning of their story, it’s clear that they have supernatural powers. Although the twins are not heroic, Jolley and Witt refer to them as “Hero Twins.”

• Jolley and Witt describe the “Hero Twins” as “very, very special because they had been blessed by the Mayan gods and could do amazing things.” But, wait! In the Popol Vuh, these twins are demigods—humans hadn’t been created yet! And if this is supposed to be a “Mayan myth,” why are the gods called “Mayan”? Wouldn’t they just be gods?

• In the Popol Vuh, Junajpu and Ixb’alanke defeat their half-brothers by turning them into monkeys. Yet, in the comic book, Jolley and Witt present the twins as tricksters: “Unfortunately for their older brothers, the twins liked to use their powers to cause mischief and play tricks…like…giving people monkey tails.”

• “Part of what they liked to do,” Jolley and Witt’s version continues, “involved getting out of the chores that their mother and grandmother gave them. When they figured out how to clear a whole day’s worth of trees with one stroke of an axe…they spent the rest of the day relaxing.” In Montejo’s adaptation, however, it’s the twins’ tools that do all the work, and, when the animals make the jungle rise back, a mouse tells the twins that their job is not to work the soil but, rather, to play ball. Clearly, there’s magic here, and it’s not just the twins who control it.

• In the Popol Vuh, the twins’ grandmother, also a demigod (of course), enlists the aid of a louse, toad, snake and sparrow hawk, to find the twins and relay the challenge from the lords of Xib’alb’a, the land of the dead. Apparently, Jolley and Witt saw all of this as a minor detail not worth narrating; in their version, Grandma simply begs the boys not to go.

• In the Popol Vuh, the twins, knowing that traps are being set, send a mosquito to the underworld to scout ahead, learn the names of the lords of Xib’alb’a, and relay this information to the boys. In the comic book, the mosquito merely bites a wooden mannequin and “discovers” that the lords had set a trap for the twins.

These discrepancies go on and on. Basically, in the Popol Vuh, the Amazing Twins, their grandmother, the lords of Xib’alb’a, the animals—all have magical powers and all are related. In the comic book, their motivations, for the most part, are individual and unrelated and the subtlety, the complexity, the lessons are all gone. There’s no cultural context for anything.

What clinches this parallel reading for me—perhaps the worst part about this graphic novel—is that Jolley and Witt frame the story with the narrative of a white suburban boy’s having to read the Popol Vuh for school. At the beginning, he’s complaining to a friend about his homework assignment: “Nah, I can’t come over tonight. I’ve got this reading thing.” By the end, however, this white boy is totally stoked. He has read the story of the “Hero Twins,” and, before slamming down the phone, tells his friend to get his own book. Besides the fact that it’s highly unlikely that a young boy would be assigned something as complex and multi-layered as the Popol Vuh as individual reading, using a cultural outsider as a framing device around a sacred Mayan saga treats it and, by extension, the Maya, as “other.”

Glossing over or omitting important details of a sacred text—and editing out all Mayan cultural markers of land and community and group responsibility—seem to have been an easy task for Jolley and Witt.

Full of gory details, creepy action, and irreverent language; and illustrated with strong lines and bright colors, Hero Twins and the other graphic novels in the “Graphic Myths and Legends” series are likely to draw in “reluctant readers.” For this generation of young readers, comic books and graphic novels are a delivery system for information. But in reading Hero Twins, what have these young readers learned? That a people’s sacred stories are fair game, to be mutilated “just for entertainment”? It would seem so. Not recommended.

[2] Montejo, Victor, Popol Vuh: A Sacred Book of the Maya, translated from the Spanish by David Unger and illustrated by Luis Garay. (Groundwood, 1999).