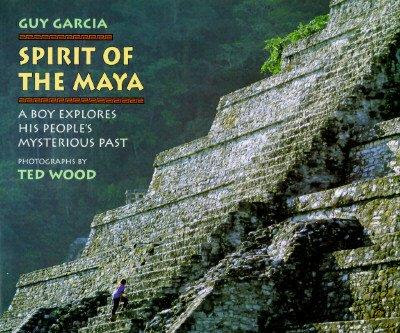 Palenque is one of the most beautiful places I’ve ever seen; the small valley is green and lush and the buildings look like they were designed to fit each into its own space. There is a great sense of history here, calm and tranquil and one imagines that it would be a lovely place to live. It is this place that Guy Garcia chose for a contrived, illogical photo-story of a Mayan boy, “exploring” “his people’s mysterious past.”

Kin lives traditionally with his family, yet whines about helping his mother, wants to speak Spanish instead of the Mayan language, and wants to cut his hair short “but his father won’t let him because it’s traditional for the Lacando’n to wear their hair long.”

Inspired by a book, Kin goes off to the temples, by himself, a tourist in his own people’s traditional lands and sacred places. He wonders what each thing he sees represents—“Those large carved heads over there—are they pictures of Maya priests or of the Sun Gods?”—and then answers himself like a scholar. To illustrate Garcia’s travelogue, Kin jumps over a gap in a wall, climbs a narrow stairway, lies on what he thinks could be Pacal’s tomb, and generally acts more like a white kid in an MTV video than a Mayan child in his own territory. Kim is depicted as so ignorant that it takes a tourist to direct him to Pacal’s tomb.

This tour makes him feel lonely and Kin tells his father “he never wants to come back.” But after seeing his own likeness in a huge head sculpture of Pacal, Kin can “for the first time in his life, know how it feels to be a king.”