Testimony: Death of a Guatemalan Village 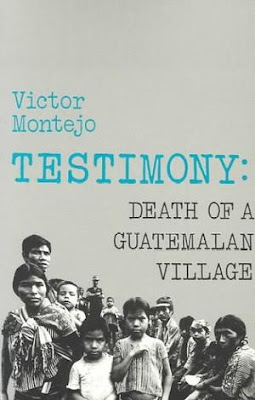 Guatemala’s 36-year civil war (1960-1996), in which leftist rebels fought the army—with huge numbers of Mayan campesinos caught in the crossfire—was one of Latin America’s most violent wars in modern history.[1] From 1982-1983, the military regime headed by Efraín Ríos Montt was responsible for widespread massacres of civilians, as well as torture, rape, and genocidal acts against Guatemala’s Mayan populations. As with many Latin American dictators, Ríos Montt was supported by the US, which trained him[2] and gave him monetary aid in his fight against the rebels. During the period of his presidency, Ríos Montt deliberately targeted the Maya in the countryside, whom the army suspected of sympathizing with and harboring the rebels.

“With the rise to power of Efrain Rios Montt,” Montejo writes, “all remaining human rights were abolished, and the army became the sole arbiter over the lives of Guatemalans.”

This history is the backdrop for a particular massacre that occurred on September 9, 1982. This is Victor Montejo’s Testimony—the testimony of a young schoolmaster, through whose eyes readers will witness the brutality and sadism that the Guatemalan army unleashed in Tzalalá, a remote Mayan village in northwest of Huehuetanango.[3]

In Spanish and English, Montejo dedicates this book “to the memory/ of the many thousand/ Guatemalans/ who were killed or disappeared/ during this decade/ of aggression and struggle./ And even/ if there are attempts/ to blot out their names/ little by little/ I know that wild flowers/ are growing daily/ from their clandestine bones—/ scattered there in the ravines and the mountains.”

Montejo does not hold back, does not mince words. His language is raw, and Montejo is a gifted educator, poet and writer. But in Testimony, he is a witness, perhaps his most important role. After a particularly savage beating, Montejo relates,

I breathed deeply to offset the effects of the beating and tried to keep my legs from collapsing with fatigue. It was now midnight, and my thoughts flew toward my wife and children, who would be alone in our home, worried sick over my absence. My clothes were stiff from the mud and water and stained with blood: they clung heavily to my body, causing my muscles to tense so as to repel the cold that bit at the marrow of my bones….

I followed [the soldier] like a starving and filthy beggar, eager to curl up in some out-of-the-way corner and wrap himself in trash or anything else he can find that will keep the cold from freezing his bowels. I understood then why beggars love their treasure trove of old and ragged things and why they sleep with one eye open to protect them at night, and why they guard them so jealously during the day. Whatever beggars have, beggars love. Those tattered bags full of fruit waste and rotting leftovers were precisely what I craved that night.

I encourage teachers to use Testimony with their eighth-graders, just before they go on to the next stage in their formal education. I encourage them to keep returning to the cover. It’s a photograph of Mayan refugees in Chiapas, Mexico, in November, 1982—one month after the massacre. How many survived? Where are they now?

There’s no polemic here, just a horrible, graphic description of what happened through the eyes of a young schoolmaster who survived it—and lived to tell about it. Along with Rigoberta Menchu’s autobiography, I, Rigoberta Menchu, Testimony: Death of a Guatemalan Village is essential reading. Thank you, Victor, for your courage in bringing this shocking event—one of far too many—to the world’s attention. Highly recommended.

[2] In 1951, Ríos Montt attended the notorious school for torture called the School of the Americas; and in 1954, the young military officer was part of the CIA-organized and –financed coup against the democratically elected President Jacobo Arbenz Guzmán.

[3] Huehuetenango was also the birthplace of Ríos Montt.