Domitila: A Cinderella Tale from the Mexican Tradition 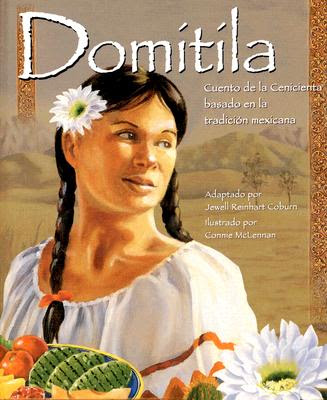 This is a rather sweet tale about Domitila, a young girl from a rugged area in the Mexican state of Hidalgo. She becomes a cook in the governor’s mansion in order to support her parents, who have lost everything in a flash flood after a rainstorm. Her mother’s words—“Do every task with care, and never, ever forget to add a generous dash of love”—inspire her. In fact, these little homilies, in Spanish and English, appear on every other page of the book, enhancing what is happening on the opposite page. I could have done without them, but morals are not all bad.

The first dish Domitila prepares by herself enraptures the governor’s arrogant eldest son, who at first derides her country cooking. When she is called home because her mother is ill, he finds a piece of her leatherwork and a bit of her cooking, and determines to find the secrets of such a skilled young woman.

Of course, the young man searches in vain—because Hidalgo is a very large state—and encounters the wicked stepmother and her lazy daughter, who conspire to get rid of Domitila, marry her now-widowed father, and capture the prince, uh, governor’s son, by any means necessary. The young man is aided in his quest by the kindly women in the town, who seem to be incarnations of Domitila’s mother. Instead of a glass slipper, he shows her the tooled leather strap from her sandal, professes his love, and they go on to marry and live happily ever after.

This story does not stay with its sappy beginning; it instead shows a humble young woman with great gifts who doesn’t give up her values, and a young entitled man who changes his values to match those of his beloved. The land is honestly portrayed, as are the people who live there. I see no condescension in the author’s portrayal of the characters, or in the illustrations that capture the essence of the surroundings and enhance the storyline. Recommended.