Waiting for the Biblioburro // Biblioburro: A True Story from Colombia

In Colombia, internal conflict between paramilitaries and guerrilla groups ebbs and flows, exacerbated by political upheaval and the drug trade. In the north of Colombia, in a rural area controlled mainly by paramilitaries, and still under threat of violence and repression, a former schoolteacher has outfitted his burros as a mobile lending library. For ten years, Luis Humberto Soriano Bohórquez has gone from village to village reading to children, helping them with their homework, and lending books to anyone within burro distance. He and his wife have also built a library that serves more than 250 children in the area.

In the course of his travels he has been threatened with violence, has been robbed, and was injured in a fall from his burro. Despite these obstacles, he continues to promote literacy because he believes that it is key to ending violence and bringing peace to his country. Soriano’s courageous work is the inspiration for two recent children’s picture books, both published in English in the US. Waiting for the Biblioburro tells the story through the eyes of a little girl named Ana, whose town receives a visit from the biblioburro. Biblioburro: A True Story from Colombia follows Soriano through a day of trekking into the countryside and back with his library. Both books simplify Soriano’s life and mission, as one would expect, but a closer examination of each text shows the troubling degree to which essential details have been purged and sanitized for a US audience. 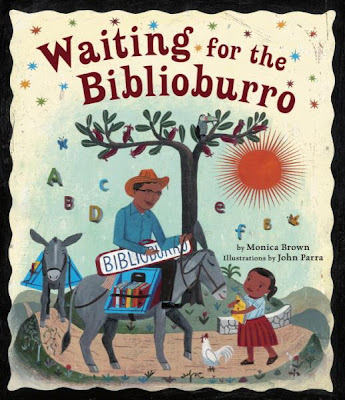 Ana, the protagonist of Waiting for the Biblioburro, lives in a remote farming town. A long-gone schoolteacher once gave her a book, which she treasures, but she craves more stories. One day, a man comes through town with books loaded on his burros. He reads stories to the children and lends books to all. Ana loves having more stories to read and tell to her brother. While waiting for the librarian to return, she makes a book that tells the story of the man with the biblioburros. She presents him with her book on his return, and he adds it to his library to share with children in another town.


Brown’s book is striking in its omissions. Not only is Soriano never named, but the story is never located in a town or even a country. The only mention of Soriano and Colombia is in the author’s note at the end of the book, easily overlooked. The lack of concrete place names mirrors the lack of proper names throughout the book; the only named characters are Ana and the two burros, Alfa and Beto. This lends the entire story a dreamlike quality that is encouraged by John Parra’s illustrations. Removing Soriano’s name and intent creates a child-centered narrative that emphasizes personal charity over collective liberation, and ignores the lived political realities of the Colombian people in favor of a wish-fulfillment story that centers a child’s concerns so completely as to eclipse any other perspective. 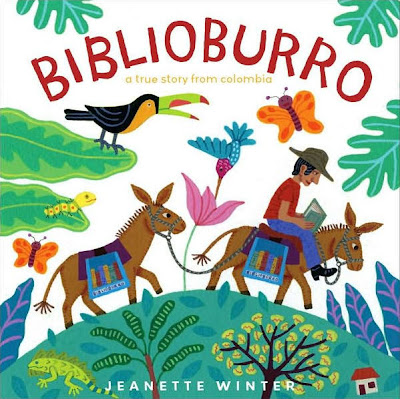 Biblioburro: A True Story from Colombia takes a slightly more accurate approach to the story of Soriano, according him a first name and the story a location. The story introduces Luis, who likes to read. He acquires too many books, and his wife, Diana, complains. He gets the idea to share his books with children, and loads up his burros with books. On his way to a village, he meets a bandit, who steals one of his books. He reaches the village and reads a book about pigs to the children, then returns home to eat dinner and read late into the night.

The book matter-of-factly depicts the amount of work and danger that the bibliotecario faces each day that he sets out on his rounds, rather than presenting him as a Johnny Appleseed-style figure that simply appears when he is most needed. However, it still leaves out the wider political context, recasting a real-life incident in which Soriano was accosted by a group of paramilitaries as an encounter with a single “bandit.” The book has other significant missteps as well. Winter’s illustrations, while beautiful, present Colombia as a cartoon jungle full of oversized animals and few, if any, houses, contributing to the US stereotype of foreign countries (especially those in the Global South) as exotic and backwards.

Winter also decides to portray Diana, Soriano’s wife, as a shrew and a drudge. In the book, Diana’s irritation at the growing piles of books induces Soriano to think of the biblioburro. She packs his books onto the burros and, when he returns, cooks him dinner. The few actions allow her make her seem entirely adjunct to her husband. In reality, Diana also helped to build the library, making it unlikely that she would berate her husband for collecting books. In addition, the couple runs a small restaurant to make their living, which means that she would have little time to assist him in his daily routine.

Both books manifestly underestimate children’s ability to accept what is real. Children encounter trauma, poverty, and loss every day, and see it in the lives of others. There is no reason to traumatize children though their reading, but going to the opposite extreme, removing any signs of struggle from their books, defeats the purpose of telling real stories at all. By the same token, allowing exoticization and stereotyping of other people and countries also serves to diminish the benefit of telling children stories of courage and change. Let us write and buy children's books that respect both the subjects of the stories and the children we are hoping to enrich. Neither Waiting for the Biblioburro nor Biblioburro: A True Story from Colombia is recommended.

For teachers who are moved by the story of Soriano and his family and want to introduce them to their students, consider resources that contextualize the situation in Colombia with more depth and dimension. For example, the website supporting the PBS Point of View documentary “Biblioburro: The Donkey Library” (www.pbs.org/pov/biblioburro/) has a wealth of resources including clips from the film, video news updates from Soriano, and straightforward information about the political and economic violence in Colombia. It also includes interactive maps providing information about literacy rates worldwide as well as videos of mobile libraries in Africa, North America, Australia, Asia, and Europe.