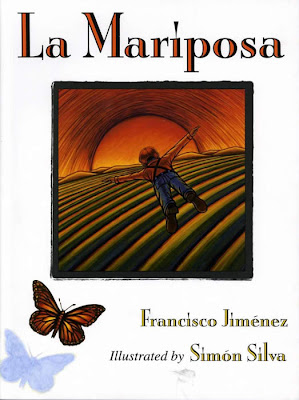 On the school bus, a cacophony of voices gives young Francisco headaches. Everyone speaks English, a language he doesn’t understand. Francisco is overwhelmed and his mind wanders; he dreams of flying out of the classroom to the lettuce fields to be with his father, who works there. In the schoolyard, his teacher berates him for trying to communicate with a young friend in Spanish and, after a misunderstanding that leads to a fight with another child, Francisco withdraws into himself even further. His only solace is watching a caterpillar in a jar—and drawing.

As the year progresses, he witnesses the wonder of a beautiful monarch butterfly unfolding from its cocoon in the jar, and his drawing of the butterfly—which had disappeared several months before—wins a blue ribbon! As the children release the butterfly, Francisco’s teacher repeats in Spanish what he has said—“¡Qué hermosa!” And then smiles and says—“How beautiful!” By the end of the year, the teacher has relaxed, some of the children are speaking some Spanish and Francisco is speaking some English.

This narration of Jiménez’s autobiographical story about a Spanish-speaking child’s surviving his first year of school in the US is unembellished and straightforward, and is beautifully enhanced by Silva’s acrylic, bold-lined paintings, on a palette reflecting the colors of the monarch butterfly. Also available in Spanish, this title is highly recommended.