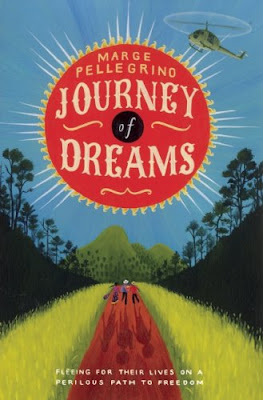 Between 1982 and 1992, hundreds of churches and synagogues across the United States offered sanctuary to refugees fleeing civil strife in Guatemala and El Salvador. The Sanctuary Movement began in Tucson, Arizona, through the efforts of Presbyterian minister John Fife and local rancher Jim Corbett. Marge Pellegrino, who today lives in Tucson and works with refugee children from Latin America, Africa, and the Middle East, puts a human face on the refugees’ dilemma through the journey of 13-year-old Tomasa and her family.

Tomasa is Quiché Maya from the Guatemalan highlands—a population targeted for relocation and cultural and physical genocide by the Guatemalan military in the 1980s. (In all, more than 200,000 people, mostly from Indigenous communities, were killed or “disappeared” between 1954 and 1994.) In 1984, Tomasa’s family receives threatening letters after her mother complains about villagers sickened by aerial spraying of chemicals. After Tomasa’s brother is nearly drafted into the army, he and their mother flee. Tomasa, her younger brother and sister, and her father find themselves on the run not long afterward, as soldiers come to their village to relocate the residents to “model villages” under government supervision. Seeking to reunite with Mama and Carlos, Tomasa, her Papá, younger brother Manuel, and baby sister Maria journey through the jungles of the Guatemalan highlands, across a raging river (three times!), through Mexico, and into the United States.

Pellegrino does a fine job of giving personality to each member of a large family. Younger brother Manuel’s sense of betrayal at his mother’s abrupt departure is especially well drawn. In Mexico, while Papá works at odd jobs to earn money to continue the journey, the ten-year-old boy pursues a troubled and possibly dangerous woman whom he sees as a mother figure. Yet Manuel is also the family member who finds medicinal plants to save his baby sister’s life. Tomasa is grown up before her time, sacrificing without complaint for the good of her family. It is interesting to compare her role in the family with that of that of young teenagers in the US today. The author’s use of popular stories—Papá is a respected storyteller in his village—and dreams enhances the plot, recalling Laura Resau’s effective use of these devices in Red Glass (2007). A lengthy historical note and a glossary of words in Spanish are nice additions.

Pellegrino was unable to find a US publisher for Journey of Dreams. The British publisher Frances Lincoln does a fine job with the book—this press has published other titles for young people about human rights and the experiences of refugees in Europe—but the British spellings and word choices may prove jarring to American readers. In evaluating Spanish-language books published in Spain but set in Latin America, Peninsular usages are frequently cited as a problem, as they remove the reader from the setting that the author is trying to establish. Given that several chapters take place in the United States, and a representative of the Sanctuary Movement appears throughout the novel, using American English would have been more appropriate even for British readers. With this caveat in mind, Journey of Dreams is recommended.