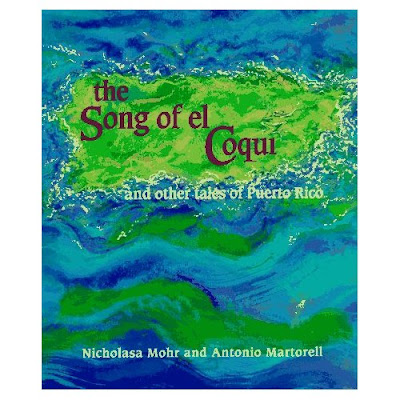 After the furious god Huracán creates a storm because there was no music, he is awakened by the song of the tiny coquí “in the rivers, through the forests, in the flowers, in the palm trees, in the caves, even in the wind…coquí, coquí, coquí, it sang.” When La Guinea is caught by slave raiders in her little village, she is brought across the water to a strange place where she is rescued and befriended by a mask maker who is inspired by her beauty. After La Mula, abused by the bandits who own her, is befriended by an enslaved young man, the two escape and find their way to his community and freedom.

What connects these three stories is that each animal is related in some way to one of the three cultural groups in Puerto Rico. The tiny coquí represents the Taino people, the original people of the island; La Guinea, the guinea hen, represents the African people, brought to the island as slaves; and La Mula is a parable about the Spaniards who conquered the island and eventually became part of the Puerto Rican people. While the symbolism might be lost on younger readers and listeners, Mohr’s drama and humor and beautiful writing—“the sound grew louder and louder. It echoed once, it echoed twice. Soon the sound was everywhere…Coquí, coquí, it sang. In the rivers, through the forests, in the flowers, in the palm trees, in the caves, even the wind…Coquí, coquí, coquí, it sang”—is enhanced by Martorell’s vibrant pastel artwork, full of color and light. Together, storyteller and artist have created a stunning tapestry, a gift from the Puerto Rican peoples to the world. Highly recommended.