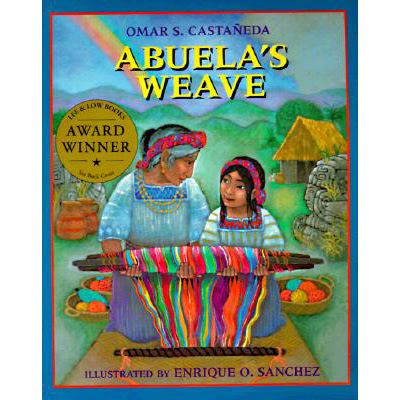 In the Guatemalan countryside, a grandmother teaches her young granddaughter to weave on a backstrap loom. “Pull back hard,” Abuela says, “make it jolt, so the threads stay close, like family.” As her abuela and Esperanza weave fabric to sell in Guatemala City, Abuela worries because more and more marketable goods are being machine made, and Esperanza worries that customers will be frightened of Abuela because of her prominent facial birthmark and the rumors that she is a witch.

So Abuela pretends to be a woman in mourning. Wrapping “a long black shawl around her shoulders and across her face so that only her eyes appeared to the world,” she walks behind her granddaughter, pretending not to know her. Alone, Esperanza struggles to set up her wares, and many customers stop to admire the large and elaborate tapestry they have made. Soon, everything has been sold, Abuela shows up and takes off her scarf, and the two board the bus together for the ride home.

This story leaves one wondering what its lesson is. If it’s to show how a child is taught to be self-reliant, it doesn’t work: A Mayan grandma would not leave a young child alone, in a crowded marketplace, bartering and taking money. If it’s to show that looks are not important, then why is Abuela ashamed of her birthmark? In Mayan society, a birthmark can sometimes be an omen, but generally it would be accepted for what it is. And if some people think that grandma is a witch, they would be respectful of her. Fixation on unblemished beauty just doesn’t cut it in Guatemala where people who work in sweatshops have accidents, people working in the country get bitten by snakes and insects, and many people get maimed and killed by the death squads. So this birthmark thing appears to be a device to drive the story, which it doesn’t.

Although Sanchez’s vibrant acrylic-on-canvas paintings show real people and reflect the colors and patterns of Mayan textile art, I would rather have seen a warm story of a little girl learning to weave from her grandmother, without all the angst and drama.

Note about words: Although the text is English, it’s understood that the people are speaking either Spanish or a Mayan language or a mixture of both. But just inserting a couple of Spanish words is confusing. For instance, Esperanza might say, “yes, Grandma” or “sí, Abuelita,” but she wouldn’t say, “yes, Abuela.” People live in homes, not huts; the word “hut” refers to a crude or makeshift dwelling, and its use here is demeaning. And is it really necessary to describe Abuela as having “wrinkled old hands”? Not recommended.