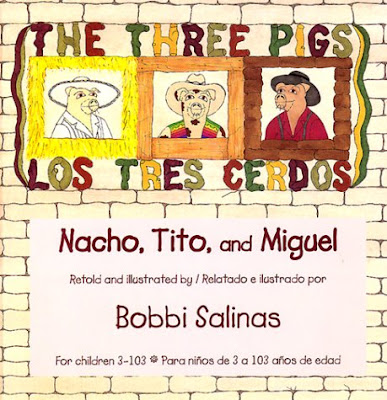 This bilingual story is a much more thoughtful and loving telling (also way funnier) than that of the Grimm Brothers or any other Eurocentric or “multicultural” version I’ve seen. The three pig brothers—Nacho, Tito and Miguel—leave home and their tearful, encouraging mother, not to seek their fortunes, but to “seek new adventures and meet new friends.” Nacho and Tito purchase materials and build their houses, but of course, José the wolf, ever dreaming of carnitas and chicharrones, blows down their houses and takes them captive. It is up to Miguel to outwit José (and leave him exhausted and wounded besides) and save his brothers, after which they sit down to a dinner of corn on the cob, green chili stew with tortillas, chunky applesauce and fresh apple cider. Way better than carnitas and chicharrones, eh?

The Spanish translation can be hilarious, too; the familiar refrain, “by the hairs of my chinny-chin-chin” becomes, in Spanish, “by my grandma’s beard” and “Ay, te wacho,” (which you won’t find in Google Translate because it’s Caló and Google doesn’t understand Caló) becomes, “Hasta la vista, baby!”

This is all classic Bobbie Salinas, definitely meant to be read aloud (so children can shout the refrain, “No way, José!”) and then handed over to youngsters to pore over the amazing pictures. (They may not recognize Frida Kahlo or Cantinflas, but some of us will.) Highly recommended.