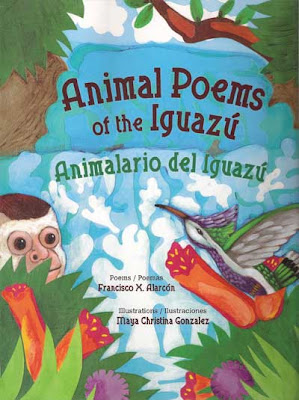 Alarcón, author of an acclaimed series of bilingual seasonal poems, uses his visit to the Iguazú Waterfalls as inspiration for this collection. Poems depict the variety of animals that inhabit the rainforest in this region at the junction of Argentina, Brazil, and Paraguay. We read of Toucan (“for a beak / I have two / papaya slices”), Parrot, Hummingbird, Martin Pescador (also known as the kingfisher), Lizard, Jaguar, Monkey, Turtle, and others. Poems also describe the earth, the sky, and the falls, and honor the indigenous Guaraní of the region. A final poem, “Same Green Fate,” urges the preservation of the rainforest: “let’s listen to / the green voice / of the rainforest … protect all of us / for the Earth’s fate / for your own sake…”

González’s mixed-media illustrations give life and personality to the creatures of the Iguazú. Because Alarcón has created the poems in both Spanish and English, readers fluent in both languages will notice that these aren’t literal translations but rather take advantage of the unique sounds and rhythms of each language. In all, this is a lively and colorful book that will hold the interest of young children and also makes a good choice for second language learners at the elementary and middle school level. Highly recommended.