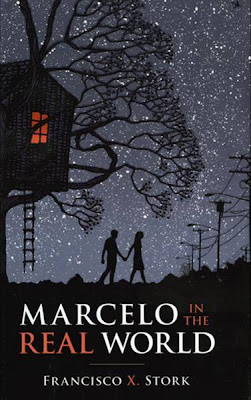 Seventeen-year-old Marcelo Sandoval has attended an exclusive private school for children with disabilities for most of his life. Yet his father, a high-powered attorney whom Marcelo calls by his first name, Arturo, wants this sensitive teen with Asperger Syndrome to experience “the real world.” Arturo arranges for Marcelo to work in the mailroom of his law firm. Taunted and exploited by the son of a colleague, Marcelo comes across a big secret the law firm is hiding. His dogged pursuit of the truth brings him into direct conflict with his own self-interest and the values and goals of his father.

In many ways, this novel begs comparison with Mark Haddon’s The Curious Incident of the Dog in the Night Time—with the protagonist’s autism spectrum disorder, his uncovering of a family secret, and his pursuit of truth and goodness in a confusing and often hostile and corrupt world. Stork, an attorney as well as an author of two other novels for young people, overlays a philosophical dimension onto the character-driven story. Marcelo’s “special interest”—world religions—is atypical of persons with Asperger (the most common is trains and other modes of transportation, but interests can vary widely). The discussions Marcelo has with a female rabbi—even though he is not Jewish—prompt him to follow his conscience.

Another unusual aspect of this book is its depiction of an affluent Mexican-American family. Arturo’s practice relies on corporate clients in Mexico. This is a reality rarely touched on in books for young people, which tend to focus on poverty, migrant labor, and gang life when portraying Mexican Americans. Stork’s novel will challenge readers’ assumptions while offering a memorable protagonist and a great story, too. Highly recommended.