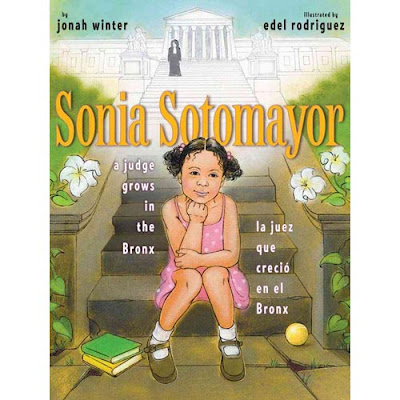 “You never know what can happen,” Winter writes. “Sometimes the most beautiful moonflower blossoms in an unexpected place—on a chain-link fence, near broken glass, next to an abandoned building—watered by someone whose name you might not even know. And sometimes the most amazing person blossoms in just such a place as well. So it was with a little girl named Sonia. Her blossoming began with her mother’s love and hard work.”

Sonia Sotomayor’s mother and her large extended family worked very hard to see their children thrive in an environment that was both materially poor and culturally wealthy. “Although I grew up in very modest and challenging circumstances,” Sotomayor said, “I consider my life to be immeasurably rich.”

The beautiful, hardy moonflower, the flower of Puerto Rico, is a visual highlight in this pictorial biography for children; Rodriguez’s artwork—rendered in pastels, acrylics, spray paint, and oil-based ink on a palette of mostly warm yellows and oranges—is luminous.

Jonah Winter is a talented writer who, except for an occasional condescension (“‘justice’ is a fancy word for a judge”), knows how to write for children. However, as an observer looking from the outside in, he has minimized or left out important historical and cultural truths about Puerto Rico and her people.

• Economically depressed neighborhoods—“bad” neighborhoods—are created, not born. Sonia Sotomayor’s neighborhood was an end result of “Operation Bootstrap,” a US government program that did away with Puerto Rico’s agriculture-based economy and produced one centered on industry and the military. “Bootstrap” impoverished hundreds of thousands of Puerto Rican people, who were driven to the mainland, where they found only marginal employment—if any. In fact, there are now more Puerto Ricans living in New York than there are in Puerto Rico.

• Most Latinas work hard, and many still wind up with low-wage jobs or on the streets or in prison or in other impossible situations through no fault of their own. Winter doesn’t take into account the problems that result from impoverishment and discrimination; the hardships—including racism and sexism—that Latinas in this country have to deal with.

• Yet Sonia Sotomayor’s neighborhood has created poets, artists, playwrights, teachers, doctors, lawyers, activists and revolutionaries. Parents in economically marginalized neighborhoods, as much as anyone else, love and nurture their children. To assume that a value system of respect, honor, dignity, and humility—the cornerstone of Boriqua culture—doesn’t exist in a barrio in El Bronx, is wrong.

Poverty is insidious; it grinds people down. It’s economic, not cultural. To raise a child to grow up healthy and whole takes more than personal will. It takes a “village” to raise a child, and in Sonia Sotomayor’s life, that village was her large extended family, who instilled in her the love and nurturing—el orgullo de Puerto Rico—that enabled her to navigate the road that was chosen for her.

It’s a perceived notion in this country that people need only to “pull themselves up by their bootstraps” in order to succeed, and that the dominant society’s measure of “success” is a universal benchmark. But every marginalized society has a family structure that has within it inherent strengths and values that may be said to be measures of success. To imply that individualism is what motivated Sonia Sotomayor and her mother, as Winter does here, diminishes—no, negates—their real lives and struggles. What a terrible message to send to children.

Also problematic is the Spanish translation, which, in most places, is strictly literal rather than grammatical. This takes away from the reading experience, leaving bilingual readers confused and wondering why the text doesn’t flow.

This book had great potential, and I really wanted to like it. There needs to be a good, honest children’s book about Sonia Sotomayor’s life, her family, and the values with which she was raised—that molded and shaped her into una mujer orgullosa. But Sonia Sotomayor: a judge grows in the Bronx/ la juez que creció en el Bronx is not that book. Not recommended.

—Beverly Slapin (Míl grácias to my sister, Magdalena Nieves, for help with this review.)
(published 4/6/13)

If you’re writing about a particular culture, you have to get the cultural markers and the historical details right. Here are some examples of what Winter got wrong:

• “Her mother and father were from Puerto Rico, and Sonia grew up surrounded by the tastes and sounds of Puerto Rican culture. A favorite meal was Spanish rice and beans.”

• “She had grown up as a “Nuyorican”—a child of Puerto Rican parents.”

Nuyoricans are people who came to the mainland and settled in New York, or people whose parents or grandparents did. Having been brought to the concrete jungle created a new identity; coming to or growing up in such neighborhoods in New York and the Bronx became an extension of being Boriqua.

• “People she’d grown up with were poor. And many of them weren’t as lucky as she had been: They’d had trouble learning to speak English, trouble finding jobs.”

That people continue to have difficulty with language barriers, difficulty with finding jobs—is an external measure of poverty, not a reason for it. The reason for the impoverishment of the Nuyorican community is colonization, the role that was created for Puerto Rico. Puerto Ricans still migrate from the island to New York to work at minimum-wage jobs—if they can get them. It’s unfair to call Sonia Sotomayor “lucky” because her mother worked hard to acculturate, to learn to speak the language, to take the jobs, to go to school.

• “Unlike many judges, she knew firsthand what prejudice was—what it was to be judged for your background. In the world of judges, this made Sonia very special.”

The word “special,” used in this context, trivializes Sonia Sotomayor’s experiences. A more respectful way of describing how Sotomayor’s life experiences aid her role as a judge might have been written this way: “Unlike many judges, she knew firsthand what prejudice was—what it was to be judged for your background. This real-life experience gave Sonia an understanding of poverty, racism and inequality that most judges have never seen.”

• “A district attorney is a lawyer who prosecutes criminals.”

No, a district attorney is a lawyer who prosecutes persons accused of criminal offenses. “Innocent until proven guilty” is an important concept that children should know.

• “Like most project tenants, Sonia’s family did not have a lot of money, but still she knew they were more fortunate than her cousins and aunts and uncles back in Puerto Rico, whom she visited every summer. Home in America, Sonia attended good schools…”

This is both an outsider’s value judgment and a socio-historical misstatement. Sonia Sotomayor’s extended family members in Puerto Rico probably did not have much in the way of material possessions, but it’s unlikely that the young Boriqua child ever felt “more fortunate” than the rest of her family. Puerto Rico is a territory of the United States and, as such, it is inseparable (for now) from “America.”