Montezuma and the Aztecs 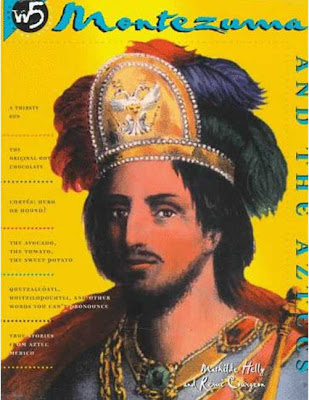 This title is part of Holt’s “W5” (who, what, when, where, and why) history series, originally published in France under the title Cortés et son temps. The stated goal of the series is to bring history to life for young readers, and the text brings in culture as well as history and biography.

Beginning with the Chinese epigraphy, “A picture is worth a thousand words,” the mostly full-color illustrations include photography, drawings, maps, cartoons, modern paintings, and antique prints. The text of each double-page spread covers a different topic, ranging from aspects of Mexica (Aztec) cultural and spiritual life, to the establishment of Tenochtitlán, to the military campaigns of Cortéz and the exploitation of the Yucatán peninsula, to the lives of Moctezuma (the correct spelling) and Cortéz themselves.

Unfortunately, the goal of this book is belied by the sloppy writing and editing, inconsistent and illogical design, and most important, the condescending Eurocentric perspective that stereotypes and demonizes every aspect of the powerful and rich Mexica culture. A few of the more egregious examples:

• The cover bears the legend, “Quetzalcoatl, Huitzilopochtli, and other words you can’t pronounce.” We can pronounce these words just fine. To whom does the “you” refer? Certainly not to Mexica children.

• On the first page is a photo of a “Mexican salad.” The salad, in a large clay bowl, consists of tomato, corn, beans, peppers, and pieces of cactus—with the thorns on. While nopales are part of the traditional Mexican diet, do the authors really think they were/are eaten this way? Also in the salad are cards with very odd statements from children and adults about Mexica people, such as: “It was hot where the Aztecs lived so they ate chili.” What is the point of this?

• A headline for one of the spreads says, “The Gods Are Like Germs: They Are Countless, Invincible, and Hyperactive.” The accompanying text does nothing to explain what this might mean. The illustration shows a naked Mexica man kneeling, looking into a microscope. Although the Mexica honored many, many aspects of nature, how is referring to them as “hyperactive” and “germs” in any way educational? And while the Mexica were technologically advanced for their time, they did not have microscopes.

• Another headline, “Eat Your Heart Out,” leads one of several gory references to blood sacrifice, accompanied by an equally gruesome set of images. Here, the text reads in part:

The body was cut up: the skin stuffed with cotton, went to decorate the façade of the palace where the priests lived; the right thigh went to the emperor; the head was impaled on a stake; the blood was smeared on the statues of the temple. The rest was eaten by the family of the man who had captured the victim or was thrown to the wild beasts kept in the palace….[T]he smell of decaying flesh and coagulated blood was masked by copal incense.

What was the source for this? We don’t know. It was likely based on turn-of-the-14th Century Catholic apologists for the destruction of the Mexica empire. Human sacrifice was an important part, but not the only aspect, of Mexica culture and cosmology. How can putting this inflammatory and prurient text alongside a sarcastic headline encourage any serious interest in the study of such a complex culture?

• The section called “The Garland Wars: They Only Sound Pretty” is accompanied by the cartoon image of a grinning Jaguar warrior, down on one knee, presenting to a smiling Olive Oyle lookalike a bouquet—of severed limbs. The Flowery Wars, as they are more commonly known, were an institution in which the sole purpose was to settle land disputes between neighboring nations by seeing who could take more captives. The emphasis was—unlike today’s warfare—not on killing the enemy but on attaining a higher rank and recognition from one’s own people.

• “The Aztecs Never Discovered the Wheel, But Their Children Played with It Every Day,” says another headline, which is accompanied by a photograph of an Mexica toy with four wheels. What does this incongruous headline mean, then?

• At Moctezuma's crowning, after self-mutilation ceremonies, the authors state that “he had sacrificed several quail on the altar; then with a gold incense burner he had waved incense toward the four corners of the earth to symbolize his power and authority.” At the beginning of indigenous events, now as then, whether it is a birth, wedding, planting a garden, or dinner, there is an honoring of the four directions—and Mother Earth and Father Sky—to ask their blessings for the undertaking at hand. Power and authority rest easily only on those who honor the givers of life, and not even Moctezuma would have put himself above the forces of nature.

• Perhaps the most offensive image is the one that accompanies the section on Doña Marina or La Malinche. It is a color photo of a beautiful young Indian woman (most probably from Guatemala— which is nowhere near Mexico City—and most probably Maya, not Mexica). Over her mouth are placed the words, “Translation by Doña Marina” as if she were wearing a gag. What is this image supposed to suggest to our daughters—that they should be silent? That their role in life is blind obedience to those who would “conquer” them? The text states that Doña Marina was Cortez’s willing “mistress and closest advisor,” but in fact, there are many stories in our culture about La Malinche and no one knows for sure what the truths are.

Although there are Mexica scholars in Mexico today—and over fifty variants of the original Mexica language, Nahuatl, that are still being spoken by over a million people—there is nothing in this book from a Native point of view. The racism in the artwork and text is just appalling; page after page after page suggest to young readers that the Mexica were conquered because of their savagery and backwardness. Further, there is no attribution for any of the illustrations, no source notes, and no recommended bibliography. Apparently, the authors do not expect young readers to do further research on any of the many topics covered here.

In a review of the “W5” series for the Minneapolis Star Tribune, Professor Jane Resh Thomas of the University of Minnesota writes:

A species of seductive, expensive, glitzy, inferior nonfiction has emerged. Reference books for kids ought to exemplify clear thinking and principles of excellent writing. But a competent teacher would reject a student paper modeled after Montezuma and other titles in this series.

We couldn’t have said it better. Not recommended.