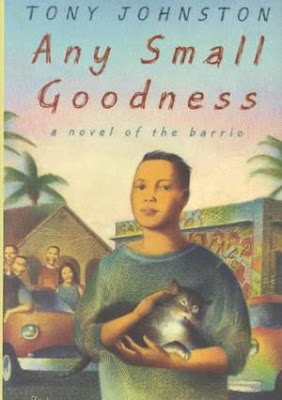 Any Small Goodness is one of those few middle-school novels that tempt me to quote from every page. It’s that engaging, that good.

From the perspective of young Arturo Rodriguez, nine vignettes combine to tell the story of a family living in a community that few outsiders know. The community is the East LA barrio and Arturo’s extended family is newly arrived from Mexico.

Of course, there’s material poverty in the barrio. Of course, there are gangs and drive-by shootings and tragedies that sometimes engender hopelessness. But most of all, there’s a close-knit community of extended, intergenerational families who take care of each other. This thread of family, language, culture, and community is woven through the narrative of a smart, funny, introspective young person. It’s this narrative of Arturo’s inner struggles and personal growth that connects the stories.

When his teacher dismissively “gringo-izes” him and his classmates, Arturo accepts his new name, “Arthur.” But when he sees how Abuelita’s “tears glaze her voice,” he encourages his friends, as a group, to take back their names. Confronting the daily challenges in his neighborhood, Arturo is aware of what drives the conflicts that poor people have to face:


Papi’s mumbling a news clip to himself, then falls into reading aloud. It’s about a load of people, some even kids, who’ve sneaked into the US from Mexico, on foot. So many, they’re nearly smothered inside a flimsy and ancient truck. The vehicle picked them up stateside, miraculously evading authorities, only to be estrellado, squashed, on Highway 101 by an out-of-control semi. Many dead, though the final count’s not in. Sounds like the score of some game. “Siempre lo mismo. Los pobres desperately seeking for betterment, but often finding worse,” Papi says. A tear slides through his voice.

And when the family survives a drive-by shooting in which their home is left a shambles, there is understanding and compassion and family unity:


Those malditos who did this….They’re kicked-around dogs, going on maldad. So mean, they’d blast roses right out of some lady’s flower garden, just to hear their guns….We form a ring, a ring of Rodriguezes. Like a kind of prayer. No one says so, but I think we all know, right here we’re holding all that matters in the whole world. We’re holding each other.

There is comfort, lots of it. When Arturo’s anger gets the best of him, his Papi is there:


“Mijo.” With cariño, Papi touches my shoulder and looks into my face. The world seems to wait while he arranges his thoughts. Then slowly he says, “In life there is bueno and there is malo. If you do not find enough of the good, you must yourself create it.” A big speech for him. And I can tell he’s not done. After a moment he says, “Remember this thing—any small goodness is of value.”

And that’s when Arturo recognizes what choices he and his friends have. What they choose will surprise young readers and give them food for thought.

There’s much more in Arturo’s story. There’s humor, lots of it. There are relationships with caring outsiders who do good without the need to be acknowledged.

A small digression about language and culture: What often ruins this kind of middle-school novel for Spanish-speaking children is a clumsy or literal use of Spanish and insertion of cultural markers that don’t make sense. Here, Johnston excels in getting things right. She skillfully intersperses Spanish words and phrases throughout so that readers who don’t speak Spanish can infer their meanings from the contexts. For readers who speak Spanish, the words and phrases are idiomatic when appropriate, as are the translations in the glossary. This is important; literal translations, common in children’s books, are off-putting to Spanish-speakers.

In dialogue, Johnston presents Abuelita’s limited English, either as hissing when she has an important and impassioned point to make (“Theeesss name Arter—eeet burns in my earsss like poisssson”) or as speaking English in the way correct Spanish would be spoken (“Limones good also for that” and “you are a most very good hero”). This shows that Abuelita is learning to speak English, rather than just throwing words together.

And the author, who raised her family in Mexico, deftly weaves in cultural markers throughout the story. When, for instance, some gang members invade a school dance, they are forced back, and when the young thugs lose the ensuing stare-down,


Mega-Mango recovers its spunk. The drummer scrolls a drumroll as [the gang members] move back and back. The guitar players strum and sing the song, “Vaya con Dios,” though that’s not what they really mean. Just when the gang reaches the door, Luis taunts them with a few choppy notes, well known as standing for the worst thing you can say of someone’s mother.

With clear type and wide margins, and a small black-and-white illustration and poem epigraph heading each chapter, the book is inviting to readers. They won’t be disappointed.

Without polemic, without didacticism, without stated morals of any kind, Johnston has crafted a gentle, loving novel that will appeal to young urban readers of all cultures and ethnicities, and will especially touch the hearts of migrant children from Mexico. Any Small Goodness is highly recommended.